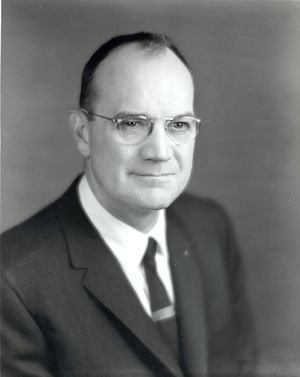 William Walden Mumford was born June 17, 1905 in Vancouver, Washington. He received the Bachelor of Arts Degree in 1930 from Willamette University, Salem, Oregon, majoring in physics and mathematics. Upon graduation he became a member of the Technical Staff of the Bell Telephone Laboratories entering the Radio Research Department at Holmdel, New Jersey. In 1953 he was transferred to the NIKE Radar Laboratory at Whippany, New Jersey as a supervisor to organize a group to undertake exploratory development directed toward radar receiver improvement.

Mr. Mumford's contributions in the microwave field include TR boxes, filter, directional couplers, wideband coaxial-to-waveguide transducers, helix-to-waveguide transitions and the gas-discharge noise generator. These are covered in thirty-five published papers and seventeen patents. He is the co-author of a chapter on TR Boxes in the book, "Radar Systems and Components", published by D. Van Nostrand Company, New York, New York, 1949. He also contributed the subject matter on Radiation Hazards appearing in the Encyclopedia of Electronics, published by Reinhold Publishing Corporation, New York, New York, in 1962.

His interest in radio communication began early. He received his first amateur radio operator's license at the age of eleven and his first commercial operator's license at fifteen. He served in the United States Coast Guard as a radio operator on the Cutter Algonquin in 1923 and 1924, and as a telegraph operator, clerk and manager with the Western Union Telegraph Company during the next two years. From 1928 to 1930, he was associated with the Oregon State Highway Commission Testing Laboratory.

Mr. Mumford, a licensed professional engineer in the State of New Jersey, became a Fellow of the IEEE in 1952 in recognition of his contributions in the field of high frequency propagation and in the development of microwave components.

He has served continuously on the Administrative Committee of the IEEE Group on Microwave Theory and Techniques since its inception in 1952 holding the posts of Secretary, Vice-Chairman and Chairman of the Group. In 1964 he was made an Honorary Life Member of the M.T.T. ADCOM.

William Mumford and his wife, Elizabeth, enjoy traveling here and abroad. They enjoy entertaining at home, especially when it includes the families of their son, William W. Mumford II, their daughter, Joan Sturtz, and the eleven grandchildren. On these occasions Bill Sr. breaks out his baritone ukulele with Joan on the soprano ukulele and Bill Jr. on the guitar.

His outdoor hobby is fishing for bluefish off the Jersey Shore or for northern pike in Lake Champlain. Bill and Betty may be found wading the trout streams of New Jersey on opening days. His indoor interests include fly tying, puzzle solving and amateur radio. A few years ago he became interested in the 6 x 10 pentomino puzzle. He has collected and catalogued 1927 of the 2233 possible solutions. Upon retirement from the Bell Telephone Laboratories in a few years, Bill hopes to remain active in his chosen fields through a non-profit research foundation.

Retrieved from "https://ethw.org/w/index.php?title=William_W._Mumford&oldid=172311"
Categories:
This page was last edited on 4 January 2019, at 21:38.
About ETHW
Policies and disclaimers