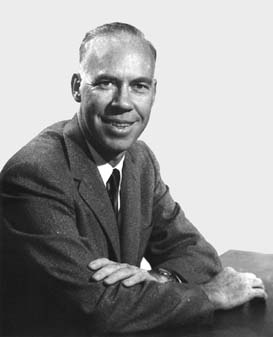 It was Ernest Orlando Lawrence who invented the first cyclotron back in 1930. But it was his colleague, a young mechanical engineer by the name of William Brobeck, who built on Lawrence's concept to design the world's largest and most powerful particle accelerators of their era, thereby playing a key role in inaugurating the golden age of nuclear science.

"Bill was one of the great persons who helped Lawrence organize a pioneering science institution which became the prototype for science laboratories the world over," said retired Berkeley Lab physicist Ed Lofgren, who headed the development and operation of the Bevatron and knew Brobeck in his early days.

From 1937 to 1957 Brobeck was assistant director and chief engineer of the Lab -- then the UC Radiation Laboratory. He joined the best and the brightest in the field of particle physics when he was only 29 years old, and went on to oversee the construction of what were then the most famous atom smashers in the world -- the 60-inch and 184-inch cyclotrons, and finally the Bevatron.

Brobeck was the first person to marry science and engineering by applying professional engineering techniques to accelerator design -- something that became standard procedure in all future accelerator construction. The instruments he created represented major technological advances and were subsequently associated with important discoveries in particle physics. The Bevatron, for example, which could accelerate protons to energies of 6.5 Gev, made possible the creation of antiprotons, a discovery that earned Owen Chamberlain and Emilio Segrè the Nobel Prize in 1955.

Former Lab director and Nobel laureate Edwin McMillan once referred to Brobeck as the "master of the confluence of engineering and physics," who "transformed homemade toys into superb tools of the intellect," and "helped open to human understanding the worlds of the atom and of subatomic particles."

Brobeck's first large-scale assignment was to design the 60-inch cyclotron in 1939 -- then the largest and most powerful accelerator in the world. Brobeck scaled up Luis Alvarez's model to devise the historical machine. "To him, more than to any other one individual, goes the credit for the success of the 60-inch cyclotron and all subsequent developments," said Lab founder Ernest Lawrence in 1951.

The 60-inch cyclotron was used for the discovery of the early transuranium elements and established the Laboratory's preeminence as a world leader in accelerator design. Subsequently, Lawrence put Brobeck in charge of designing its successor, the 184-Inch Cyclotron, which inaugurated the field of experimental high energy physics using accelerator beams.

Soon thereafter Brobeck proposed a practical method of applying the principle of "phase stability," discovered by Ed McMillan, to accelerate protons to energies in the billion-volt range and higher in ring magnets. Brobeck successfully embodied this revolutionary concept in the construction of the Berkeley Bevatron, which would dominate the field of particle physics for years to come and further accelerate man's understanding of energy and matter.

After retiring from the Lab in 1957, Brobeck continued his contribution to the field of accelerator design by establishing his own consulting firm in mechanical, electrical and electronic engineering. In 1971 Brobeck was awarded an honorary degree from UC Berkeley for his lifelong contributions. Brobeck held engineering degrees from Stanford University and MIT, and was also a renowned scholar of English literature.

Brobeck's professional interests and bursting ingenuity extended way beyond the field of accelerator design. In 1972, for instance, he was hired by the U.S. Department of Transportation to develop pollution-free vehicles. Even in his retirement years Brobeck continued to design gadgets that made him as famous in his neighborhood as accelerators did in the world of science. Among them: an automated lawn mower that could start up by itself, head out onto the lawn and mow it before going back, turning itself off and recharging its battery. He also invented an automatic record changer and a car that ran on both gas and electricity.

Brobeck died in 1998 at the age of eighty-nine, leaving behind a lifetime of contributions to the field of accelerator physics.

Retrieved from "https://ethw.org/w/index.php?title=William_Brobeck&oldid=147618"
Categories:
This page was last edited on 8 March 2016, at 18:11.
About ETHW
Policies and disclaimers