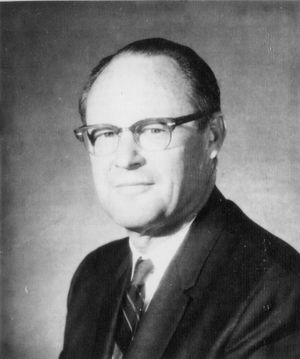 William B. McLean was born in Portland, Oregon in 1914 and was educated at the California Institute of Technology (B.S., M.S., and Ph.D. Physics) and received a post doctoral fellowship in Nuclear Physics at the University of Iowa.

Dr. McLean entered Federal Civil Service in 1941 as a nuclear physicist with the National Bureau of Standards engaged in the design and production of proximity fuses. In 1945 he transferred to the Naval Ordnance Test Station, China Lake, California where he advanced to the position of Head, Aviation Ordnance Department. He was appointed Technical Director of the Naval Ordnance Test Station in 1954. He held this position until his appointment as Technical Director of the Naval Undersea Research and Development Center, with facilities in San Diego, Pasadena, Long Beach, San Clemente Island, Morris Dam and Hawaii.

His contributions to the advancement of science, national defense, and public service have been outstanding in his 30 years of Federal service. He was recognized as a leading scientist in the development of missiles, ordnance and underwater systems and devices.

In recognition of his outstanding achievements, special awards include the maximum Federal Government Award of $25,000 for development of the highly successful SIDEWINDER missile, the Naval Ordnance Test Station's L.T.E. Thompson Award in 1956, a Resolution of Commendation by the California State Legislature in 1957, the President's Award for Distinguished Federal Civilian Service in 1958, the American Ordnance Association's Blandy Gold Medal in 1960, the Rockefeller Public Service Award for Science, Technology and Engineering in 1965, and the Secretary of the Navy Certificate of Commendation in 1966.

He has been a Senior Member of the Institute of Electrical and Electronics Engineers since 1957. In addition he was a member of Tau Beta Pi, Sigma Xi, American Physical Society, American Association for Advancement of Science, Research Society of America, American Ordnance Association, American Society for Public Administration, National Inventor's Council, Marine Technology Society, American Society for Oceanography and a Fellow of the New York Academy of Sciences. He was elected a member of the National Academy of Engineering in 1965. He has numerous patents and publications to his credit.

Dr. McLean and his wife, LaV, resided on Point Loma, in San Diego, California. They have three sons - Bill, the eldest, Mark, a student majoring in Physics at San Diego State College, and Donald, married and living in Laurel, Maryland.

Most of what little leisure time Dr. McLean had was spent working in his well-equipped workshop, where he fabricates products from original designs. He completed a plastic bubble reminiscent of NEMO, in which he plans to take his family diving in the ocean to 100 foot depths. Other hobbies included scientific reading, product design, snow and water skiing, and skin diving.

The McLean's owned a 20 foot boat which Dr. McLean converted to an inboard/outboard. They trailered the craft to the State of Washington for boating trips through the San Juan Islands to Reid Island, Canada, or drive to Lake Chelan where they have a cabin. One of their most recent adventures was a boat trip and campout to LaPaz, Mexico.