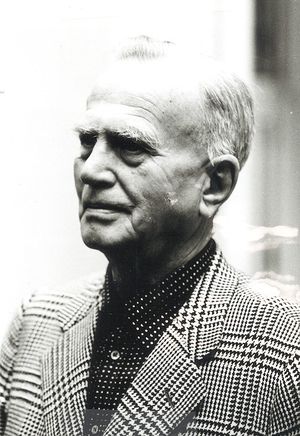 Born in Hamburg, Germany in 1907, Werner J. Kleen received the degree of Diplom Physiker from the University of Goettingen and his doctoral degrees from the University of Heidelberg (Dr. Phil. Nat. in 1931 and Dr. Habil. in 1936). He started his career with Telefunken Research Laboratories in Berlin in 1932. He advanced to Director of Telefunken's High Vacuum Development Section. In that period, apart from numerous publications and contributions in this field, he published (together with the late H. Rothe) five volumes on "High Vacuum Electron Tubes" which, in German speaking countries, were a standard text for 30 years. In parallel to his industrial activities, Dr. Kleen has been teaching at German universities since 1936.

After the second World War, he joined the Companie Générale de Télégraphic Sans Fil (CSF), Paris as the leader of a most competent and successful research group in the field of microwave tubes. All three companies Dr. Kleen was associated with in a position of decisive responsibility are still leading traveling tube manufacturers (CSF-Millimeter Wave Tubes, Telefunken and Siemens-High Efficiency, Linear TWT's for Space Applications).

In the 1950's, he gave lectures on microwave tubes in Stockholm (Denmark) and Madrid (Spain) where he was professor at the Instituto Nacional de Electronica. Two books, "Introduction to Microwave Electronics" and "Traveling Wave Tubes", summarized his knowledge in the field. Both books were translated into English.

In 1952, Dr. Kleen joined Siemens in Munich where he organized the microwave Tube Research Group. He was put in charge of the newly established Research Laboratories of Siemens & Halske AG. Under his leadership, the laboratory which was mainly materials oriented entered the field of electronic components and became one of Europe's most prestigious institutions. He initiated high speed memorywork in ferrite sheets as well as the effort that lead to the highly successful piezoelectric microphone marketed by Siemens. Even then after having published more than 30 papers and 8 book volumes, he still found time to edit the book, "Laser", in 1969.

In 1968, Dr. Kleen was appointed Director of ESTEC, the research and development organization of the European Space Agency (ESA). His drive to introduce reliable and state-of-the-art technology laid the groundwork for the successful launch of several satellites by ESA after his retirement. Dr. Kleen enjoys his retirement in his beloved Munich still traveling and consulting and as technically alert as ever. He visited the United States in 1980 to receive the the "Microwave Career Award" bestowed on his by the IEEE MTT Society. This award of course was not his first, he became a Fellow of IEEE in 1957, received the medal of the Swedish Engineers' Society in 1950 and the Gauss-Weber medal of the University of Goettingen in 1955.

Retrieved from "https://ethw.org/w/index.php?title=Werner_J._Kleen&oldid=171858"
Categories:
This page was last edited on 17 December 2018, at 20:45.
About ETHW
Policies and disclaimers