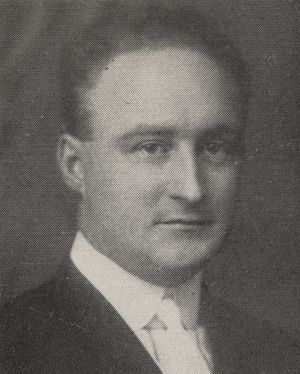 Walter Sheldon Rodman, Professor of Electrical Engineering in charge of the School of Electrical Engineering at the University of Virginia, was born in Wakefield, Rhode Island, on September 1, 1883. He wass educated in the public grade and high-school of his native town and entered Rhode Island State College in the fall of 1900, graduating with the degree of B. S. in E. E. in June, 1904.

For four years following graduation, he was engaged as Instructor in Mathematics, Physics, and Electrical Engineering at R. I. State College, receiving in 1907 the degree of M. S. in E. E., the first advanced degree ever awarded at the institution. The next two years were spent in graduate study at the Massachusetts Institute of Technology where, in 1909, the degree S. M. in E. E. was avarded, the last year there being spent as Saltonstall Fellow.

In the fall of 1910, appointment was made as Adjunct Professor of Electrical Engineering at the University of Virginia, followed in 1913 by an Associate Professorship and in 1917 by the Professorship.

Mr. Rodman joined the AIEE in 1907, was transferred to the grade of Member in 1912, and became a Fellow in 1928. He was one of the charter members of the Southern Virginia Section, serving continuously to date on its Executive Committee, and for the three years has been Chairman of that Section.

The University of Virginia Branch was organized by him in 1912, and since the office of Counselor was inaugurated, he has been active in that capacity at Virginia. He served one year as a member of the Committee on Student Branches. During the present year, he is a member of the National Sections Committee and of the Executive Committee of District No. 4.

Retrieved from "https://ethw.org/w/index.php?title=Walter_S._Rodman&oldid=178519"
Categories:
This page was last edited on 25 February 2020, at 19:59.
About ETHW
Policies and disclaimers