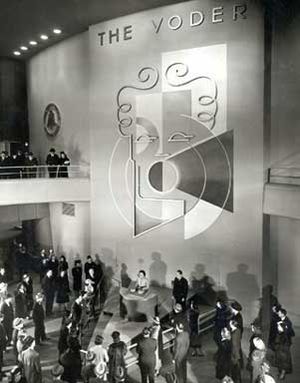 Vocoders and Voders are devices that allow machines to manipulate human speech and to create similar sounds. The Vocoder is an electronic device that analyzes the human voice, breaking it up into its component parts. Those parts can then be manipulated, transmitted over wires, or stored to serve a number of purposes. For example, many musicians use Vocoders to give digital musical instruments a realistic human “voice.” The Voder is a similar device, and sometimes the two are combined in one unit but, strictly speaking, a Voder synthesizes a human voice, acting as the voice for people who can not speak for medical reasons, such as physicist Stephen Hawking. More commonly, however, it is used to create music or motion picture effects.

The Voder was first demonstrated to the public at the 1939 New York and San Francisco Worlds Fairs as one of the wonders at the AT&T/Bell System pavillion.  An operator worked a special keyboard to synthesize human speech.

Engineer Homer Dudley and a team of researchers at Bell Telephone Laboratories invented the Vocoder in the late 1930s. Engineers were looking for a way to pack two or more telephone conversations onto telephones lines that ordinarily could carry only one. Dudley theorized that speech sounds could be analyzed by instruments and the resulting information about the sounds stored, transmitted over telephone lines, and recreated at the receiving end using an electronic circuit to “synthesize” the original sounds. This would reduce the volume of information transmitted over the lines. The device they came up with to meet this need was called the Vocoder (for “Voice Coder”). During World War II, some of what Bell Labs engineers had learned from building the Vocoder was applied to a new super-secret communication system called Sigsaly, but for strategic reasons almost all knowledge of the system was kept secret for many years before being released in 1975.

Retrieved from "https://ethw.org/w/index.php?title=Vocoders_and_Voders&oldid=120376"
Categories:
This page was last edited on 28 September 2015, at 19:55.
About ETHW
Policies and disclaimers