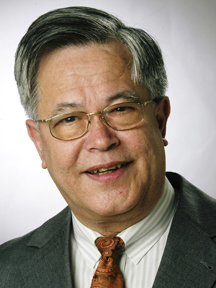 Popularly known as the “Father of Wi-Fi,” Vic Hayes is senior research fellow at Delft University of Technology in Delft, Netherlands. From its inception in 1990 through 2000, Mr. Hayes chaired the IEEE standards workgroup that defined the IEEE 802.11 set of wireless networking standards, better known as Wi-Fi. The establishment of IEEE 802.11 launched a brand-new, multi-billion dollar industry for wireless, high-data-transfer rate computer communications, enabling people worldwide to access the Internet where they want, when they want, using their laptops, PDAs or other wireless devices.

The Wi-Fi standard has been adopted by countries around the world; communities and countries creating their own networks, more vendors entering the market have caused price competition and lower costs for wireless devices. Mr. Hayes’ leadership is one of the reasons that low-cost, nearly ubiquitous wireless LAN connectivity exists today.

Through his leadership and active participation in various organizations, Mr. Hayes helped bring global recognition of the need for additional spectrum for wireless computer networks. Through the Wi-Fi Alliance he mobilized the computer industry into regulatory activities, with the result that the World Radio Conference 2003 allocated an additional 455 MHz of radio spectrum in the 5 GHz area for wireless access devices.

Retrieved from "https://ethw.org/w/index.php?title=Vic_Hayes&oldid=147344"
Categories:
This page was last edited on 1 March 2016, at 16:19.
About ETHW
Policies and disclaimers