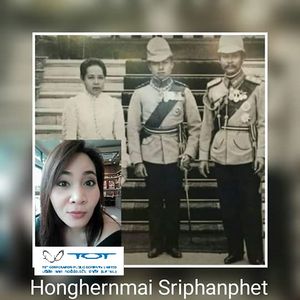 Royal Mahidol Surname is only direct inherited Prince Mahidol of King Rama V. The Family line is English Royal Family of Rama I.

ML. Honghernmai first born with blonde green eyes with twin male siblings and entitled Her Royal Princess Honghernmai Mahidol (Meiji). She was born during Showa month, April 1st, 1980 at Kensington Palace, London, UK. Her Royal Mother is Queen (formally) Suthida Mahidol, her name is secretly changed in 2001. Her Royal Father is King Mahidol. My Royal twin sibling and me has been legally married since the day we was born. We have been separated from our Palace and we could not find each other since then.

My Royal ID was stolen since I was kidnapped during childhood to Yamasmith Family and distributed ID to filipino family, Aquino, in Thailand. Surname Srichannon and first 10 ID was distributed.

I was an exchange student under Pratana Srichannon, and receive Mathematics Olympic Gold Medal, 1995 class of 1996, MN, USA with my Thai ID and Asian Scholarship from Boston University. I have given the Medal to superintendent of Delano High School. I have always been fighting with school because Shannon Nohr always duplicated my documents as well as Nicha Lim daughther of Ronnarong Lim and Yada Lim and many others.

Suchart Heng was a pilot with air hostage Kongkaew Yamasmith from Japan Airport. I was abducted to Lim family, Ronnarong Lim. Mr. Ronnarong changed his surname and ID to Srichannon because he made false birth certificate of Nid Srichannon to receive my Kensington ID.

My undergraduated degree is Bachelor degree in Electrical Engineering since I can not go to get the scholarship at Boston University myself. I graduated with Gold Medal, 1st class honor, at Sirindhorn International Institute of Technology, Thammasat University.

I have been communicating with neural network with my biological mother to work towards Post doctoral with biosensor for colored-MRI and award professorships. I later have problem of being a hostage. I graduated with KMITL in biomedical engineering with Gold Medal, 1st class honor in 2008. I am a Royal Thai Navy (RTN) General.

My bloodline is A RH negative with no HIV infection since my parents, female line is immuned with AIDS with secret protocol. It is the fact that our Royal family has found a way to first make a vaccine for protecting our bloodline from infection of HIV and AIDS through immunology. Any kind of vaccine developing from A RH negative blood to be commercialized can not be contributed without our consent.

No other Royal bloodline has been photoed with King Rama V and this photo was first place at Kensington Palace. The bloodline is from Royal consort of France, Queen Marie Antoinette.