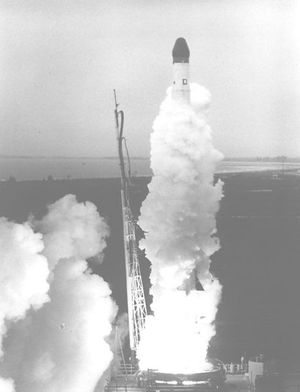 Gaining sponsorship in 1958 and officially beginning development in 1959, the Transit Navigation System was initially created for use by the United States Navy’s Polaris missile submarine fleet to increase global navigation accuracy, but was later adopted by other naval vessels and for civilian use as an all-weather global navigation system.

Following the launching of Sputnik by the Soviet Union, Frank T. McClure initiated the program in regards to Doppler tracking findings and the discovery of the “navigation problem” by William H. Guier and George C. Weiffenbach of the John Hopkins Applied Physics Laboratory. The navigation problem stated that by accurately knowing a satellite’s position, from the Doppler data an individual could know his or her position. He proposed the idea of the Transit system to the US Navy in early 1958, and sponsorship by the Polaris program and the Advanced Research Projects Agency (ARPA) began in the latter half of 1958.

The Transit program began with the launching of a series of experimental satellites (Transit-1A to -4B) aimed towards testing and settling technical issues with the final operational design. While Transit-1A to -3B were spherical, -4A and -4B were drum-shaped, allowing for a greater amount of solar cells. The latter satellites were also the first instance of operational frequencies of 150 and 400 MHz, a dual frequency which worked to correct ionospheric errors.

The first of the Transit satellite, known as Transit 1A, was launched by a Thor-D18 Able-2 rocket from Cape Canaveral, FL on September 17th, 1959. While the launch was ultimately deemed unsuccessful when the satellite failed to achieve orbit, suborbital signals sent from the satellite during flight helped to verify the concept of satellite navigation systems.

Transit-1B, launched by a Thor-Able-Star rocket from Cape Canaveral on April 13th, 1960 12:00:00 UTC, became the first Transit satellite to achieve orbit, operating for eighty-nine days. A spherical configuration weighing approximately 119 kg, the satellite had no propulsion system and was powered by body-mounted solar cells and batteries. The satellite successfully demonstrated the first engine restart in space and verified the practicality of satellite navigation. Additionally, the satellite carried an infrared scanner originally intended for the Pilot (NOTSNIK) project.

Following this successful satellite test, several other experimental satellites were launched from Cape Canaveral using Thor Ablestar launchers (Transit-2A to -4B) which allowed for further tests and modifications of the Transit satellite design. Of the experimental stage Transit satellites, only five reached orbit between April 13, 1960 and November 15, 1961. As a whole the experimental stage of the system helped improve the system’s navigation signal techniques, as well as other technical issues such as those related to attitude control and the power system, by varying satellite design until an optimal one was reached.

Transit-2A was successfully launched on June 22, 1960 and operated for more than two years until October 26, 1962. 2A satellite was the first demonstration of a dual-payload launch. Transit-2B was never built. Transit-3A was built and launched on November 30, 1960 but failed to reach orbit. 3B was successfully launched on February 21, 1961 carrying a digital clock which demonstrated the first instance of digital memory (384 bits) in space by transmitting timing signals; this demonstrated the ability of the technology to load, hold, encode, and transmit memory and data efficiently from the satellite to the ground and vice versa.

The last of the experimental satellites, Transit-4A and -4B, were launched on June 29, 1969 and November 15, 1961, respectively. In addition to employing techniques to reduce ionospheric error, -4A and -4B experimented with radioisotope nuclear generators as a means of power generation; this as opposed to the solar-generated power of the previous experimental satellites. The Transit-4A design was also the first instance of a triple-payload launch, the first to test out a nuclear power supply, and increased the memory storage capacity to 2048 bits, while -4B was launched simultaneously with the Transit Research and Attitude Control (TRAAC) satellite and flew with the first gravity-gradient boom, although only 1m of the 18m long boom was successfully deployed.

The subsequent series of Transit satellites (Transit-5A-1 to -5C-1) were considered early operational prototypes and were launched into polar orbit through use of either Thor Ablestar or Scout rockets from the Vandenberg Air Force Base in California.

The Scout rocket was initially selected as the launch vehicle because of its low cost per pound payload. However, this presented two design issues: the original mass design of the Transit satellites had to be reduced from approximately 136 kg to 55kg despite the need for a greater power input, and the increased vibrations during launch affected the payload to a greater degree due to the Scout’s all-solid rocket motors. These issues prompted the development of smaller, more durable electronic equipment which would be able to withstand the increased launch vibrations, as well as minimize the mass of the satellite.

The limitations imposed on the operational prototype design by the Scout rocket first resulted in the development of Transit-5A-1, which launched on December 18, 1962. Launched by a Scout rocket into orbit, the satellite demonstrated the ability to deploy solar panels, and separation from the launch rocket. While these techniques were successful, troubles with the power system ultimately led to it being deemed unsuccessful and it made its re-entry on September 25, 1986. Transit-5A-2 was launched on April 5, 1963 by a Scout rocket, but it failed to reach orbit. Transit-5A-3 was similarly launched on June 16, 1963 with a newly designed power system and was successful in reaching orbit, but malfunctions to the memory system during launch made the satellite unusable for navigation. Despite this issue, the satellite’s other subsystem execute successfully and -5A-3 became the first to achieve gravity-gradient stabilization.

The Transit-3-5B satellite series utilized Thor Ablestar rockets for launch; additionally, each was paired with a piggyback -5E series satellite in order to gain environmental data about the Transit satellites. While the -5E series utilized a solar power supply system, the -5B series, because of the successes of -4A and -4B, operated through a nuclear power supply. Transit 5-BN-1 was successfully launched into orbit on September 28, 1963 but became unusable for navigation when it achieved gravity-gradient stabilization upside down. While this lowered the signal level beneath the reach of low-gain antennas, geodetic and navigational evaluation data were successfully obtained.

Transit-5BN-2 was launched with Transit-5E-2 on December 5, 1963, becoming the first operational navigation satellite used by the United States Navy. Used by both surface and submarine Navy units, the satellite operated until November 1964. Transit-5BN-3 was launched on April 12, 1964 but failed to reach orbit.

This led to a change in satellite design from nuclear to solar power, both because of the lower cost and the acquisition of special approval needed for nuclear-powered satellites. Similar to the -5A series, Transit-5C-1, after some design improvements, was launched by Scout rockets on June 3, 1964 and successfully operated until August 23, 1965.

The next series of operational Transit satellites was the “Oscar” series, or SOOS (Stacked Oscars on Scout). This series was similar to the Transit-5C-1 design, but included hysteresis rods on the solar panels which dampened residual motion following despinning in orbit and increased the magnetic core storage to 30 kbit. While early Oscar satellites had short lifetimes, later satellites in the series, beginning with Oscar 12, demonstrated average orbital lifetimes of more than fourteen years, some exceeding twenty-one years (Transit-O-12 and Transsit-O-20).

The early Oscar series satellites were built by the Naval Avionics Facility at Indianapolis (NAFI). NAFI built Oscars 1, 2, 3, 5, and 7 which, except 3, were successful in reaching orbit. However, the specifications of the satellites did not meet expectations and those in orbit only operated for a few weeks, 1 and 2 operating only for a few days.

Following these design failures, the Navy decided to let APL revamp the subsystems built by NAFI for Oscars 4, 6, 8, 9, and 10 and then reassemble and launch them. These newly redesigned satellites successfully operated in orbit for seven to eleven month. APL went on to build Oscars 11 through 17, while RCA built satellites from Oscar 18 on. While Oscars 4, 6, 8, and 9 failed due to workman’s error, Oscar 10 failed due to the solar cell system; a problem which was later fixed on Oscar 12.

The satellite lifetime expectancy was estimated to be about fourteen months. However, with an average orbital lifetime of a dozen or so years, RCA, after building Oscars 18 through 32, ceased satellite production and unlaunched satellites were put into long-term storage at RCA.

The Transit Improvement Program (TIP) began in 1969 in order to develop a radiation-hardened satellite. Each satellite was given a minicomputer with a memory capacity of 64 KB, had redesigned 150 and 400 MHz transmitters, included a hydrazine thruster system to correct orbital precession, and was required to autonomously broadcast ephemerides for five days without ground interference which led to the development of a drag-free satellite series known as “Triad” (Transit-Improved DISCOS). The Disturbance Compensation System (DISCOS) was a drag-free technology under development by a group led by Daniel DeBra at Stanford University which had yet to be tested on satellite technology.

The Triad design first utilized this technology for satellites, incorporating a three-body system design which included the bottom-facing satellite, the DISCOS in the center, and a nuclear power supply at top connected with deployable booms. Other modifications to satellite design included a pulsed-plasma fuel system as opposed to the cold-gas jet system of older designs, improved short-term stability of the oscillator and the inclusion of an incremental phase shifter which increased prevision of movement response, the introduction of the quadrifilar helix antenna, and improvements of the electronic components and circuits.

In 1977, the US Navy allowed the RCA to produce three Nova spacecrafts. Launched in the 1980s, these satellites were similar to the TIP-II and TIP-III satellites launched on October 11, 1975 and September 1, 1976, respectively. The design of these satellites included improvements of magnetic damping of the DISCOS and stiffening the lower boom assembly, as well as the inclusion of a reference clock, a greater computer capacity, and a six meter gravity boom. The NOVA satellites operated for approximately eight to nine years; the first (NOVA-1) launched on May 15, 1981 and the last (NOVA-2) on June 16, 1988.

While widespread acceptance of the Transit Navigation System took time, nuclear-powered ballistic missile submarine (SSBNs) and aircraft carries used the system since the beginning of operations in 1964. The first civilian use occurred in the mid-1960s, but it was not until the 1970s and the development of low-cost receivers that the system became widely used. Eventually use of the system became more heavily civilian as opposed to military.

Over the course of the system’s thirty-two years of operation, forty-six satellites were launched from September 17th, 1959 (Transit 1A) to August 25th, 1988 (Transit O-31). Starting as a an all-weather global navigation system, the Transit system not only provided accurate and reliable navigation services, but contributed to various scientific advances, particularly space-related science, engineering, and technology, and the development of the modern Global Positioning System (GPS).

Retrieved from "https://ethw.org/w/index.php?title=US_Launches_Navigation_Satellite&oldid=157943"
Categories:
This page was last edited on 23 November 2017, at 06:49.
About ETHW
Policies and disclaimers