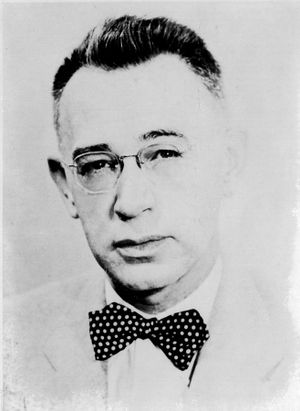 Theodore Alfred Rich was a native of Lynn, Massachusetts, where he was born on June 18, 1905. He attended Lynn High School and showed early signs of his technical bent by his interest in amateur radio. He built and operated his own ham station with call letters 1CFH.

From high school, Ted went directly to work in the Instrument Department of the General Electric Company at West Lynn where he served as a laboratory assistant. During this period, he went to night school at Lowell Institute and in the fall of 1927 he entered Harvard University. It is reported that he nearly missed gaining admission to Harvard by forgetting to report for his College Board Examination in English. However, he was admitted and in three years graduated cum laude with a BS in Electrical Engineering. While in Harvard, Mr. Rich continued to work summers at the West Lynn Plant of General Electric and in 1929 he received an engineering award of $800 for the development of an electric tachometer which later came into wide use for the measurement of engine speed in aircraft.

Early evidence of his creative abilities is found in the fact that he received two Charles A. Coffin Awards, General Electric's highest technical honor, before he was twenty-one years of age, and while he was still a laboratory assistant at the West Lynn Works. In addition, Mr. Rich holds the unusual distinction of having received three Coffin Awards, the last of which was for the joint invention, with Mr. W. H. Jensen, of a flux meter for the detection of submarines which made possible the effective harbor protection systems installed during World War II.

Mr. Rich joined the Radio Department of the General Electric Company at Schenectady in 1930 with the expectation of gaining some experience and returning to his home in Massachusetts after a year or two. However, in 1933, still with the General Electric Company, he found his niche in the General Engineering Laboratory as a development engineer in the field of instruments and measurements. This position he was to develop and expand with many outstanding contributions.

Shortly after arriving in Schenectady, Mr. Rich met and married Miss Kathryn Wilson, a Vassar graduate who had come to Schenectady to teach school. The Richs had two sons who have followed their father to Harvard, although not into engineering.

During his twenty-eight years in the Laboratory, Mr. Rich has made major contributions to measurement technology for widely diverse problems. He has been ever alert to measurement needs, and his creative solutions have resulted in eighty-eight patents. The list of these patents reads like a sizeable instrument catalog. His responsiveness to technological needs is perhaps best illustrated by his contributions during World War II, including the harbor protection equipment mentioned before, instrumentation and equipment for degaussing of ships, and magnet current regulating equipment for the electromagnetic separation of U-235 in the Manhattan Project.

About 1953, Mr. Rich became interested in the measurement of the microscopic airborne particles technically referred to as condensation nuclei. He was particularly excited about the extreme sensitivity of detection possible with this process and was highly elated when he was able to equal the sensitivity of radioactive tracer techniques under some conditions. As a result of this activity, Mr. Rich has become an international authority on the subject of airborne particulates and his work on measuring size, distribution, and the electric charge distribution has become classic in this field.

Mr. Rich's development of a condensation nuclei meter is an illustration of his inventions which are characterized by their ingenuity and simplicity. This appears to stem from his ability to combine his thorough undemanding of the physics of the phenomena with a high degree of mechanical ability in executing the design of the instrument.

Around the Laboratory Mr. Rich was known not only for his engineering competence and creativity but also for his encouragement of creativity in others. A number of engineer and laboratory technician inventors have been encouraged and urged forward by his example and active help.

Mr. Rich has published a great many papers. One of the earliest received a prize at the Northeastern District Annual Student Convention of AIEE in 1929. This was titled "The Development of a New Type of Indicator for Electric Measuring Instruments." His most recent. "A Continuous Recorder for Condensation Nuclei," on the other hand, was presented and discussed at the International Symposium fur Atmospheric Condensation Nuclei in Frankfurt, Germany, on May 25, 1961.

However, Mr. Rich preferred reading to writing and was an extremely rapid reader. This was perhaps one of his main hobbies, with mysteries and science fiction ranking high on the list, although politics, economics, and philosophy are subjects on which he was well informed. He was also interested in photography, and he fished and hunted. He loved fine machinery, and this was apparent in the automobiles he drove. He was friendly and sociable and took part in many community activities, but he relaxes with these activities and the most probable state of his active mind is dreaming up a new way to measure something.

Retrieved from "https://ethw.org/w/index.php?title=Theodore_A._Rich&oldid=172309"
Categories:
This page was last edited on 4 January 2019, at 21:35.
About ETHW
Policies and disclaimers