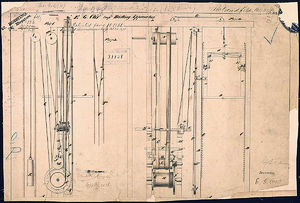 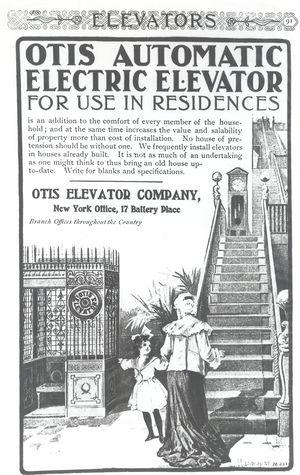 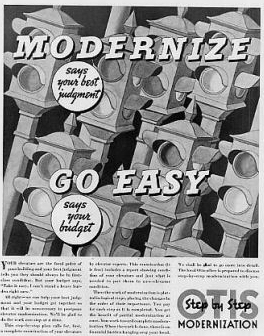 Otis Elevator advertising from the 1930's. 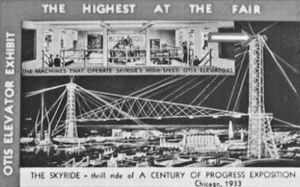 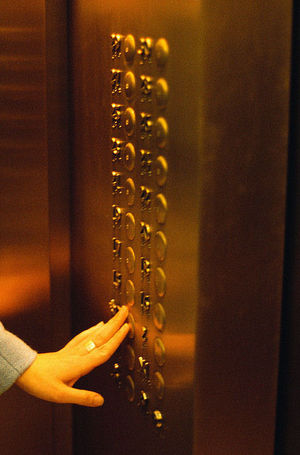 The interiors of a contemporary Elevator

In 1880, Werner von Siemens demonstrated the first electric powered elevator at the Mannheim Pfalzgau exhibition. While electric traction was new, the elevator was not. The use of hoists to lift material in mines, construction sites, and warehouses, had been around for centuries.

The first elevators designed expressly for passenger use were introduced in the 1850s. In 1854, in a dramatic demonstration at the New York Crystal Palace Exhibition, Elisha Graves Otis demonstrated the first “safety elevator.” With the elevator set up in a prominent part of the exhibition hall, he stood on the elevator platform as it was raised four stories. He then had the suspension rope cut. The audience gasped, but the platform did not hurtle to the ground. Instead it stood locked and safely suspended above the ground. Four years later in 1857, Otis installed the first passenger elevator in E.V. Haughwout & Co., a store located on Broadway in New York, NY. Powered by a steam engine, the elevator at Haughwout was the talk of the city, as thousands of curious visitors flocked to the store.

With a motor mounted on the bottom of the cab, Siemens’ electric elevator used a gearing system to climb wall shafts fitted with racks. Although novel, this electric elevator was still too crude to compete with the existing steam-driven, hydraulic elevator technology. Intended simply as an illustration broad applicability of his pioneering work in D.C. traction motors, Siemens had little interest in pursuing the electric elevator further. Siemens instead focused on large projects, such as electric trains and electric power systems.

Two decades later, the U.S. firm founded by Otis, Otis Brothers & Co., established electric power as the paradigm in elevator design and, in so doing, unleashed a dramatic change in the architectural landscape of large cities around the world. The electrical elevator lead to the birth of the skyscraper, but acceptance of the electrified elevator option did not occur overnight. Electricity was a new technology and a source of both fear and wonderment. Electricity was an unseen force that moved along slender wires. It could magically light a room or street — but it could also kill.

Fear of electrical energy was bad enough, but anxieties were ratcheted up considerably more when coupled with the thought of being suspended in an elevator 20 or more stories above the ground. Like electricity, tall buildings were also a source of fear and wonderment. Considerable progress was needed before electricity could be used and accepted in elevators. It took several decades to move from Siemens’ slow, rickety demonstration elevator to one that could move people swiftly and safely up above 20 stories.

The breakthrough came in 1902, when the Otis Elevator Co., after a costly R&D effort, pioneered the gearless, traction electric elevator. The innovation was an ingenious combination of electrical and mechanical subsystems. The first system was installed in New York, NY in 1904. Almost overnight, this new electric elevator rendered the hydraulic elevator obsolete and opened up a whole new world for architects. From 1906 to 1912, several buildings, 46 stories and taller, went up, including the Singer building, the Metropolitan Life Tower and the Woolworth Building. The addition of electro-mechanical and, later, electronic-switching devices, enabled gearless traction electric technology to send buildings soaring even higher.

Retrieved from "https://ethw.org/w/index.php?title=The_Electric_Elevator&oldid=120335"
Categories:
This page was last edited on 28 September 2015, at 19:26.
About ETHW
Policies and disclaimers