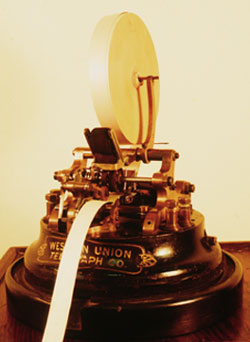 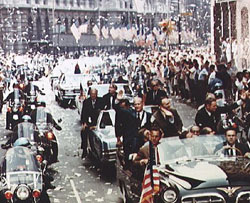 A ticker tape parade thrown in New York City’s Canyon of Heroes (the financial district) for the Apollo 11 astronauts.

Edison’s early years as a telegraph operator led to an intimate knowledge of the workings of the telegraph. While he was living in Boston in 1868, he designed a printing telegraph that only used one wire, unlike the three-wire ticker of Edward Calahan, invented the year before and used in New York. It was a clever design but had problems that prevented its commercial use.

By 1869, when Edison moved to New York, printing telegraphs had already been adapted for use in the New York Stock exchanges. In one version of the technology, the basic printing mechanism was changed slightly to print stock prices more efficiently, and its distinctive sound led to its being called the “ticker.” Edison eventually started working for the company that owned the patents to this machine, and after learning more about it struck out on his own, inventing several improved versions. By 1871 he had incorporated all his best designs into what he called the Universal stock ticker.

The Universal incorporated several key innovations, such as a unison that made sure that all of the printers on the line were synchronized with the transmitter. Other improvements included a typewheel-shifting mechanism that reduced friction and, when combined with a new paper-feed mechanism, led to significantly lower battery consumption.

A group of Universal tickers could be connected to a central transmitter. At the transmitter, an operator typed in stock information on a keyboard. Then each ticker printed the information on a long strip of paper. Nearly 5,000 of his Universal stock tickers were sold between 1871 and 1874, making it the most successful ticker on the market. The money and fame Edison garnered from this invention enabled him to build his new laboratory at Menlo Park, New Jersey.

Stock tickers were used for many years. By 1890 the New York Stock Exchange, which is itself a private corporation, purchased the rights to one of the most popular stock tickers and went into business manufacturing them and selling stock quotation services to brokers. Soon, brokers and many businesspeople kept tickers in their offices, and the machines spat out strips of tape during hours in which the stock exchanges were open. People in offices soon found that throwing a roll of paper tape out the window made a lovely streamer, giving rise to the "ticker tape parade."

As the volume of trading grew in the late 19th century, high-speed versions of the machines appeared, such as the “self winding” ticker in about 1900. On Black Thursday, 24 October 1929, when the New York stock market crashed, even the high-speed tickers could not keep up, leading to near-panic among stockholders. As a result, in 1934 the New York Quotation Company introduced its “Black Box,” an extremely fast printer. The days of the mechanical ticker were numbered after the introduction of electronics technology, and the last new model was introduced in 1960. By that time, however, electronic displays were becoming available, and today these are used almost exclusively for stock quotes.

Retrieved from "https://ethw.org/w/index.php?title=Stock_Ticker&oldid=120318"
Categories:
This page was last edited on 28 September 2015, at 19:16.
About ETHW
Policies and disclaimers