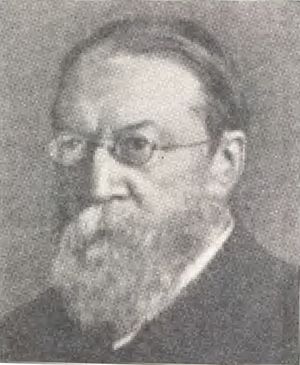 The first regular meetings of the Institute following organization meetings were held on 7 and 8 October 1884. A few days later, on 21 October, Sir William Henry Preece, pioneer in the electrical industry in Great Britain, was elected as the first Honorary Member of the Institute. He had much to do with the laying of the foundations of applied electricity, in telegraph engineering in particular. He was born in England on 15 February 1834. After leaving King's College, London, where he was educated, he spent a short time in the telegraph engineering offices of Edwin and Latimer Clarke, and in 1853 joined the Electric and International Telegraph Company. After a number of years' experience in the telegraph companies, he became a divisional engineer under the British post office, when, in 1870, the various telegraph companies were transferred to the State. He subsequently became electrician and later engineer-in-chief to the post office, retiring in 1899, when he took up a consulting practice.

Sir William Preece's official duties did not deter him from taking a very active part in the affairs of the engineering profession. He was a member of many scientific societies, and contributed largely to their proceedings. For the Institution of Civil Engineers and for the Institution of Electrical Engineers (both of Great Britain) he served as president and he was at one time chairman of the council of the Royal Society of Arts. He was a Fellow of the Royal Society. Mr. Preece's name is connected with many improvements and inventions in telegraph work. At the age of twenty-one he patented a system of duplex telegraphy; he subsequently took out a number of patents on railway signaling apparatus, although most of his inventions concern telegraph apparatus directly. He also invented a new telephone in 1878, and was proud in later years of having, in 1892, originated a system of signaling across space by induction telegraph with the aid of two parallel telegraph lines. Upon the introduction of wireless telegraphy, Mr. Preece became an active supporter of this new method of communication, and maintained an active interest in the progress of science until he died, 6 November 1913.

Retrieved from "https://ethw.org/w/index.php?title=Sir_William_Preece&oldid=181541"
Categories:
This page was last edited on 19 September 2020, at 00:07.
About ETHW
Policies and disclaimers