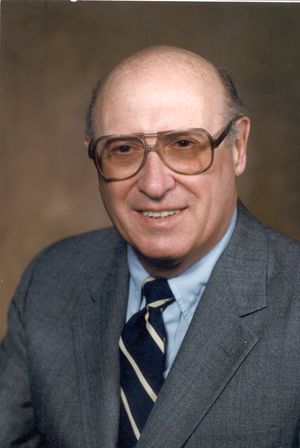 Throughout his career, Frosch's leadership skills were fundamental in the development of new technologies. His career included important success in the public, private, and academic arenas. He has skillfully led a wide variety of research and development projects, including some with implications for the environment, space travel, defense, and education.

Before his successful dissertation defense in 1952, he joined Hudson Laboratories at Columbia University, which was under contract to the Office of Naval Research. He worked as a research scientist and and four years after joining the lab he was named Director of Research

In 1963, Frosch was appointed Director for Nuclear Test Detection (Project VELA) in the Defense Department's Advanced Research Projects Agency in Washington, D.C., where he expanded the seismic research program and two years later became Deputy Director. In 1966, he was appointed Assistant Secretary of the Navy for Research and Development and was responsible for all Navy programs of research, development, and engineering.

In 1973, Frosch became the first Assistant Executive Director for the UN Environment Programme, and in 1975, he became Associate Director for Applied Oceanography at the Woods Hole Oceanographic Institution. During the presidency of James E. Carter, between 1977 and 1981, Frosch served as the fifth NASA Administrator, playing a key role in the development of the very successful Space Shuttle Program. Due to a change in presidential administrations Frosch left NASA in 1981.

In 1982, Frosch accepted the position of Vice President of Research for the General Motors Corporation Research Laboratory. There, he championed a five-year program to develop an entirely new approach to engineering electronic and electrical features of vehicles. This research led to the development of the Systems Engineering Center, and significant changes in the way GM designed and developed vehicles. Following his retirement from General Motors in 1993, Frosch became a Senior Research Fellow at the John F. Kennedy School of Government at Harvard University.

During his career, he oversaw the development of many technologies. As Director of Nuclear Test Detection, he led the design and development of the computer-controlled Large Aperture Seismic Array in Montana. This technology permitted the differentiation of seismic activity and underground nuclear testing. While with the Office of Naval Research he directed research pertaining to underwater sound, sonar, oceanography, marine geology, and marine geophysics. He managed 300 employees with an annual budget of $3.5 million. He also directed the Project ARTEMIS, and experimental active sonar system. During his tenure at NASA, Frosch directed efforts to develop the Space Shuttle and oversaw testing the first orbiter, Enterprise. Frosch's previous environmental research contributed to his leadership at General Motors where he led major developments in vehicle emissions control, cleaner fuels, improved automobile safety, systems engineering, and electronics. His desire to discover alternative transportation technologies led to research on a new generation of electric and hybrid vehicles.

Dr. Frosch is a Fellow of the IEEE and a member of the U.S. National Academy of Engineering, the American Academy of Arts and Sciences, Phi Beta Kappa, and Sigma Xi. He is also a Foreign Member of the Royal Academy of Engineering (UK). His numerous awards include the Navy Distinguished Public Service Award in 1969, the NASA Distinguished Service Medal in 1981, and the Arthur M. Bueche Award in 2003. In addition, Eta Kappa Nu named him an Eminent Member in 2000. He has also received Honorary Doctorates of Engineering from the University of Miami and Michigan Technological University.

Dr. Frosch was awarded the 2001 IEEE Founders Medal "For a career of significant advances in aerospace and automotive technology, and industrial ecology, and for skilled administration of R&D in industry, government, and academia."

Retrieved from "https://ethw.org/w/index.php?title=Robert_A._Frosch&oldid=181503"
Categories:
This page was last edited on 15 September 2020, at 17:18.
About ETHW
Policies and disclaimers