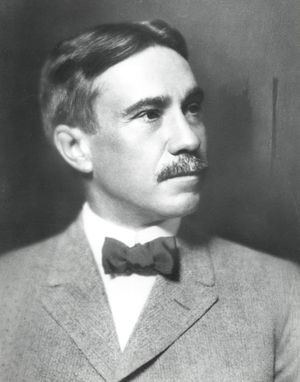 Ralph D. Mershon, AIEE President, 1912 - 1913, an engineer whose most notable contribution to engineering is his work with high voltage transmission. Mershon also invented a 6-phase rotary converter, the compounded rotary converter, and a compensating voltmeter among other inventions.

The outstanding engineering contributions of Ralph Davenport Mershon have been in the field of high voltage transmission, of which he was one of the pioneers some 40 years ago. Since that time he has been responsible for the design and construction of many important generating stations, transmission lines and substations in different parts of the world.

Mr. Mershon was born in Zanesville, Ohio, July 14, 1868. At the age of 17 he was engaged in railway location and construction for one year. Entering Ohio State University, he graduated in 1890 with the degree of M.E. He was student assistant in physics and electrical engineering during his senior year, and for one year following graduation was assistant instructor in electrical engineering.

During the period of 1891-1900, he was employed by the Westinghouse Electric and Manufacturing Company at East Pittsburgh, Pa., securing experience in all branches of electrical work. The transformers for which the Westinghouse Company received an award at the World's Columbian Exposition, Chicago, 1893, were of his design. In 1896-97 he was in charge of investigations of phenomena which occur between conductors at high voltages, for the Telluride (Colo.) Power Transmission Company and the Westinghouse Company. These original investigations of ionization and other atmospheric losses were of great importance at that time, and were carried up to 133,000 volts. On a leave of absence from the Westinghouse Company in 1897-98, he was chief engineer for the Colorado Electric Power Company. During 1898-1900, Mr. Mershon was engineer in the New York Office of the Westinghouse Company, resigning in 1900 to enter the private practice of consulting electrical and mechanical engineer in New York City, in which capacity he is still active. He has designed and supervised many power plants and transmission systems in the United States, Canada, South Africa and Japan.

Mr. Mershon has to his credit many inventions, which include the 6-phase rotary converter, the compounded rotary converter, systems of lightning protection for electrical apparatus, and a compensating voltmeter for which he was awarded the John Scott medal of the city of Philadelphia.

Prior to the war, Mr. Mershon was active in the creation of the reserve officers training corps in 1917. During the war he was detailed to the Naval Consulting Board, and was Lieut.-Col of Engineers at the time of his retirement from military service.

Mr. Mershon has served on a number of the Institute's committees and was manager 1900-03, vice president 1903-05, and later president. He is a member of other technical societies in the United States, Canada and England, and is a past president of the Inventors' Guild. Since 1895, he has been the author of a number of technical papers of importance to the industry. A paper presented in 1897 contained a chart for transmission line calculations, for which he has become widely known. In 1918 Tufts College presented him with the honorary degree of doctor of science.