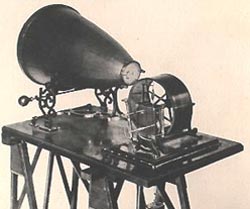 The first sound recordings were captured by the French inventor Edouard-Leon Scott de Martinville in 1857. He used a device called the phonautograph to record the sound. The phonautograph consisted of a cone-shaped speaking horn with a flexible covering on the small end. A sharp point was attached to the flexible diaphragm, and it touched the surface of a piece of paper. The paper was covered with a thin layer of black soot, and if it were moved beneath the stylus as someone shouted down the horn, the resulting vibration of the diaphragm would be captured as a squiggly line in the soot on the paper. Scott intended his invention to be used to study sounds, and never considered reproducing the original sound. The phonautograph could record but not play.

Thomas Edison’s phonograph was inspired by this—Leon Scott’s phonautograph. The phonautograph could record music, but not play it.

Leon Scott’s work was continued by the instrument-building Rudolf Koenig in Paris in 1865. Koenig not only made phonautographs for sale but also experimented with the recording of sound. He would later become one of the pioneer experimenters with the phonograph and other types of sound recording equipment. Examples of the phonautograph were highly sought in the United States. Joseph Henry, for example, owned one, and it is today preserved in the Smithsonian Institution. A professor at the Massachusetts Institute of Technology named Charles Cross experimented with one, and he and his student Charles Morey made improvements to it some time before 1874. Another form of the device was William Henry Barlow’s Logograph of 1874, which used a small paintbrush dipped in ink to record sound vibrations on a strip of paper. Another form of the phonoautograph that became popular used a flat glass plate, coated with a layer of soot, as the recording medium. The use of the clear glass made it easier to photograph the tracings, and this was important since they were often published in scientific journals.

One of the most interesting variations on the phonautograph was the one invented by Alexander Graham Bell. In the summer of 1874, one of Bell’s associates supplied him with the ear and part of the skull of a dead man. Bell attempted to attach a recording stylus to the ear and use it to inscribe a line on a smoked-glass plate. But the tympanum and the muscles that attached to the tiny bones of the inner ear were too dry, so Bell rubbed them with glycerin. It worked, and when Bell shouted into the dead man’s ear, the stylus recorded his speech on the glass. Nothing became of the ear phonautograph, but it may be the only case of a body part being used in making a sound recording.

Retrieved from "https://ethw.org/w/index.php?title=Phonautograph&oldid=120271"
Categories:
This page was last edited on 28 September 2015, at 18:52.
About ETHW
Policies and disclaimers