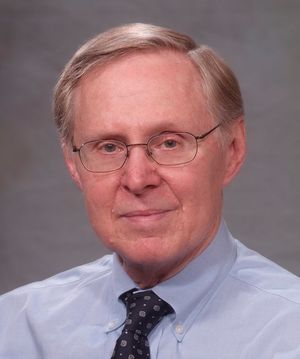 Peter Staecker, IEEE President, 2013, Spent the first part of his career at MIT's Lincoln Laboratories before moving into the private sector at MA/COM.

Peter Staecker ( S’63, S’65, M’70, SM’86, F’95, LF’08 ) holds BS and EE degrees from MIT, and MS and Ph.D. degrees from Polytechnic Institute of Brooklyn. His professional career started in 1972 at MIT Lincoln Laboratory, as a Member of the Technical Staff, where he developed solid state device test techniques, precise automated, and design and test techniques for satellite communications. As part of this activity, he developed the Laboratory’s first automated and parameter test systems using the (then) rare IEEE 488 interface bus and desktop .

In 1986, he joined M/A-COM as Senior Corporate Engineer, where he led program, product, and process development. He and his project team developed a series of high-efficiency high-power multipliers that achieved record power levels and popular product line status as sources. As Director of Engineering of Advanced Program Development, he helped the company’s transition from defense to commercial markets. As Director, he also established strong ties with US (University of Michigan, Rensselaer Polytechnic Institute, Penn State University) and European research centers. These ties supported research in the partner and helped to build a technically strong and diverse staff of researchers in M/A-COM’s growing R&D organization. In recognition of his leadership and contributions to and devices and circuits, he was elevated to IEEE Fellow in 1995.

Staecker has served industry and on advisory panels, and is a consulting editor to journals.

Staecker is Past-President of the IEEE Microwave Theory and Techniques Society (MTT-S), and is an IEEE Life Fellow. In 2006, MTT-S recognized his continued outstanding contributions and service by electing him its 12th Honorary Life Member. His twenty-eight year service to IEEE includes leadership roles in Finance, Publications, and Membership. He has served on the IEEE Board of Directors for six years, and in 2012 served as IEEE President-Elect before assuming the office of IEEE President in 2013.

Retrieved from "https://ethw.org/w/index.php?title=Peter_Staecker&oldid=187115"
Categories:
This page was last edited on 13 January 2022, at 06:10.
About ETHW
Policies and disclaimers