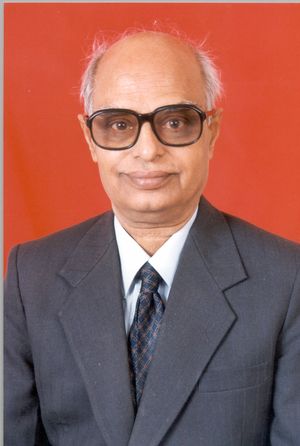 A former professor of electronics at the Indian Institute of Technology in Delhi, Pavagada Venkata Indiresan is best known for his concern for educational reforms, economic development and social justice in India.

He has written extensively on these issues in journals and newspapers and, in 1984, publicly questioned the Indian Government about academic freedom.

Recently, the Government's Department of Science and Technology, commissioned him to write a report, Vision 2020: Driving Forces and Impedances, on the use of technology for India's long term development.

An Honorary Professor at the Centre for Policy Research in New Delhi, Dr. Indiresan was born in Madras, India on 6 September 1928. After studying at the Presidency College in Madras and at the Indian Institute of Science in Bangalore, he received a Ph.D. from the University of Birmingham in England.

Returning to India, he joined the University of Roorkee in 1953 as a lecturer and became a professor in 1965.

That year, he moved to the Indian Institute of Technology in Delhi. In 1972, he helped establish its School of Radar Studies, now called the Centre of Research in Applied Electronics.

Professor Indiresan, who retired in 1993, has long been a spokesperson for fostering excellence in engineering education and career development. He is also known for promoting the value of the electrical engineer to the Indian government and for helping foster Indian professional engineering institutions.

The Indian Government's Invention Promotion Board has twice presented its highest prize to Professor Indiresan. His students have contributed to a Hall of Residence named after him, making it the first time any professor at ITT has been so honored.

He was the President of the Indian National Academy of Engineering, Chairman of the Naval Research Board and head of a national committee on the design of rural and urban habitats.