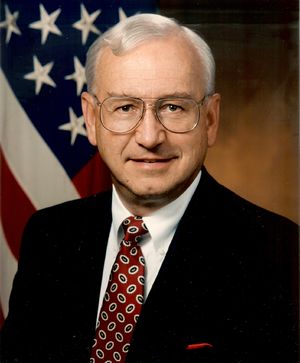 Paul G. Kaminski’s technical prowess and leadership skills have played a key role in the development and application of the U.S. Offset Strategy developed to counter the massive conventional forces of the Soviet Union during the cold war. The three components of that strategy included Precision Guided Munitions (PGMs) to permit one weapon to destroy one target; advanced Intelligence, Surveillance, Reconnaissance Systems (ISR) to find and track the targets; and Stealth Technology to permit delivery of the PGMs on target in the presence of air defenses. This combination provided immeasurable benefits to national security and military capability. Dr. Kaminski’s work on low-observable airborne systems led to the development of stealth aircraft including the F-117 fighter and B-2 bomber and advanced cruise missiles with stealth ability.

Many years ahead of similar systems pursued by other nations, the F-117 was designed as not simply an airplane but, in combination with ISR and PGMs, provided a complete weapons system incorporating ordinance and targeting capabilities. It changed the paradigm of air warfare and provided a dramatic reduction in the loss and capture of U.S. aircrews. Critical to the success of Dr. Kaminski’s stealth technology innovations was his implementation of the Integrated Product Team concept and the use of red teams for identifying and solving problems early in the development process.

He also championed physics-based modeling and simulation during development of the F-117, which accelerated testing and provided the basis for the development of algorithms to route the aircraft that gave great confidence to test pilots. Dr. Kaminski’s work in stealth and counter-stealth was complemented by his earlier work in PGMs in the late 1960s, followed by his work in unconventional satellite imaging systems in the early to mid-1970s. This work helped form the basis for the B-2 long-range stealth strategic bomber, refining the technologies with advances in sensors, control systems, and modeling and simulation.

Retrieved from "https://ethw.org/w/index.php?title=Paul_G._Kaminski&oldid=146803"
Categories:
This page was last edited on 16 February 2016, at 15:29.
About ETHW
Policies and disclaimers