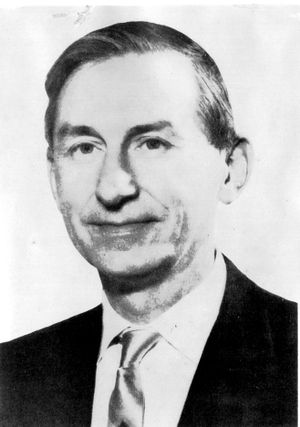 Otto H. Schade, Sr. was born on April 27, 1903 in Schmalkalaen, Germany and was educated in Halle and Berlin. He came to the United States in 1926 and five years later he began his long association with the RCA Tube Department in its Harrison plant. Although he retired in May 1968, he has been retained as a Consultant.

Since 1938, he has specialized in television circuits, camera tubes, picture tubes, and the analysis of television system performance. From 1944 to 1957 he worked on a unified general method of image analysis and specification, including practical methods for measuring the spatial frequency spectrum and fluctuation levels (noise) of optical, photographic and electronic image system components and the eye. He later had the responsibility for the thermal and electrical design of nuvistor tubes. requiring an extension of electron tube theory and refined methods for calculating the characteristics of close spaced electron tubes. More recently he has developed an accurate method for calculating the resolving power of television and photographic systems to assist in the evaluation of high definition T.V. systems. He has developed a new electron optic providing minimum aberrations and uniform focus in T.V. camera tubes with larger (50 x 50 mm) image surfaces developed for the Air Force Systems Command. Dr. Schade has been awarded 85 patents and has presented or published more than 30 papers on electron tubes, circuits, and image evaluation. He contributed to the development of photographic, electronic, and optical image systems, as well as to studies of the eye. Schade is known most widely developing the modulation transfer function concept.

In 1946 he received the company's highest citation, the RCA Victor Award of Merit, for his contribution in the field of television. Mr. Schade, a Fellow of the IEEE and the S.M.C.T.E., has also received numerous other honors including the Modern Pioneers Award of the National Association of Manufacturers (1940), and the Morris N. Liebmann Memorial Prize of the Institute of Radio Engineers (1950) "For outstanding contributions to analysis, measurement technique, and system development in the field of television and related optics.". He was also the first recipient of the David Sarnoff Gold Medal Award of the Society of Motion Picture and Television Engineers (1951) and the 1969 IEEE Vladimir K. Zworykin Award.

In June 1953, Mr. Schade was in vested with the honorary degree of Doctor of Engineering by Rensselaer Polytechnic Institute. In 1960, he received the Progress Medal Award of the Society of Motion Picture and Television Engineers for his outstanding technical contribution in the engineering phases of the motion picture and television industries, and in 1965, he received the Journal Award of the S.M.P.T.E. for his paper entitled "An Evaluation of Photographic Image Quality and Resolving Power" published in February 1964 (ST 2482). In 1968, he received the David Sarnoff Outstanding Achievement Award and, in 1969, he received the Technical Achievement Award from A.S.M.P. for "Effecting a Marriage of Electrons and Optics Making Possible Sophisticated Designs of Lenses."

Dr. Schade met his wife, Marta, in Germany - followed her to the United States where they were married in 1927. The Schades had one son, Otto H. Jr., who was also an engineer, employed by RCA. He resided with his wife Elizabeth and their three children, Lisa Beth, Eric Geofrey, and Kristina Sue in North Caldwell, New Jersey.

The Schade's basement houses mostly workshops. Dr. Schade's hobbies ranged from building scale model ships and a small 4-cylinder gasoline engine to completely rebuilding the motor and automatic transmission of a cadillac and the building of a seven room house for his son's family. In his fully equipped dark room at home, he does precision printing and enlarging of photographs and test patterns for his lab at Harrison.

Retrieved from "https://ethw.org/w/index.php?title=Otto_H._Schade&oldid=173751"
Categories:
This page was last edited on 15 February 2019, at 15:46.
About ETHW
Policies and disclaimers