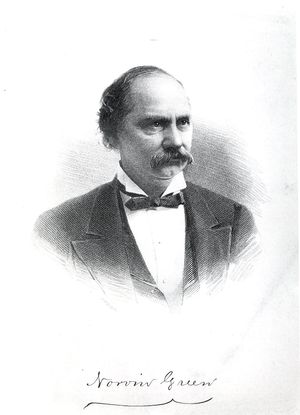 Norvin Green was born in New Albany, Indiana on 17 February 1818. His father, Joseph, was a farmer and veteran of the War of 1812. Green moved with his family to Kentucky while he was still young and was educated in country schools. Even as a young man, he demonstrated a talent for business. He ran a floating grocery store on the Mississippi River when he was sixteen years old and also had a business chopping and selling firewood. These enterprises allowed him to help his family and pay for a medical education.

At this point in his life, Green also developed a strong interest in politics and served several terms as a member of the Kentucky State legislature. In 1853, he was appointed Commissioner of the United States in charge of the construction of national buildings in Louisville. He oversaw the construction of a Customs House and post office. During this period, he entered the field of telegraphy, becoming one of the trustees of the the United Morse and People's Telegraph telegraphing extending from Louisville to New Orleans. Later he became president of these interested which were united under the name, the Southern Western Telegraph Company.

The American, United States, and Western Union telegraph companies were consolidated in 1866 and Green was made vice president of the organization. He worked in telegraphy for rest of life, with exception of three years in the early 1870s spent as President of the Louisville, Cincinnati and Lexington Railroad Company. In 1878, Green was made president of Western Union. Throughout his somewhat varied career, Green was known for his strong work ethic and certainly developed a useful network of business associates.

Green, one of the AIEE's founders, served as first president, holding the office for two terms (1884-1886). His political savvy supported a nearly successful Senate run and lobbying the national government on behalf of telegraph interests. By the end of his life, the boy who started by selling groceries on the river had managed to amassed a $2 million fortune of stock and real estate.

Green had a well-developed life beyond work. He had a keen sense of humor, was popular at his club, and a devoted smoker. He was married to his wife, Martha English, for more than fifty years. The couple raised four sons and two daughters. He died on 12 February 1893 at his home in Louisville, Kentucky.

Retrieved from "https://ethw.org/w/index.php?title=Norvin_Green&oldid=159987"
Categories:
This page was last edited on 1 July 2018, at 02:48.
About ETHW
Policies and disclaimers