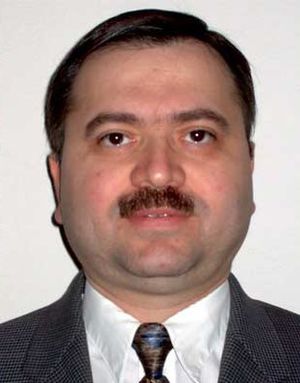 An associate professor of electrical engineering at the University of Texas at Dallas, Dr. Al-Dhahir’s research interests include OFDM wireless networks, signal processing for communications, and digital subscriber line technology. He was a principal member of the technical staff at the AT&T Shannon Laboratory from 1999 to 2003, where he worked on space-time coding and signal processing. He co-authored “Doppler Applications for LEO Satellite Systems,” has written over 55 journal articles, and holds 11 U.S. patents. An IEEE Senior Member, Dr. Al-Dhahir is a member of the IEEE SP4COM and SPTM technical committees and an editor for IEEE Transactions on Communications. He is co-recipient of the 2005 IEEE Transactions on Signal Processing Best Young Author Paper Award.

Retrieved from "https://ethw.org/w/index.php?title=Naofal_Al-Dhahir&oldid=158770"
Categories:
This page was last edited on 6 April 2018, at 16:45.
About ETHW
Policies and disclaimers