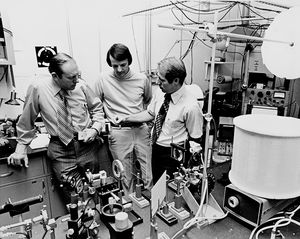 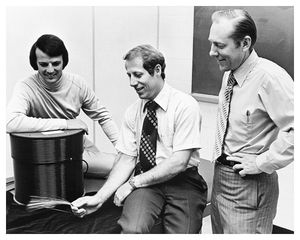 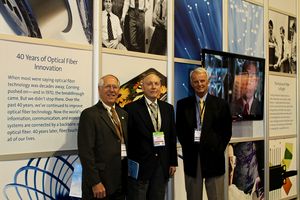 In 1970, Corning scientists Dr. Robert Maurer, Dr. Peter Schultz, and Dr. Donald Keck developed a highly pure optical glass that effectively transmitted light signals over long distances. This astounding medium, which is thinner than a human hair, revolutionized global communications. By 2011, the world depended upon the continuous transmission of voice, data, and video along more than 1.6 billion kilometers of optical fiber installed around the globe.

During the mid-1960s, members of the British Post Office came to Corning seeking assistance in creating pure glass fiber optics. Their design required a single-mode fiber (100 micron diameter with a 0.75 micron core) having a total attenuation of about 20 dB/km. The very best bulk optical glasses of the day had attenuations of approximately 1,000 dB/km. This meant Corning’s scientists had to see an improvement in transparency of 1,098 in order to reach the 20 dB/km goal. It seemed impossible, but they did it, inventing an optical fiber with attenuation of 17 dBkm. As a result, Corning’s invention of the first low-loss optical fiber and the manufacturing process used to produce it revolutionized the telecommunications industry and changed the world forever. The explosion of the Internet and other information technologies would not have been possible without optical fiber. Only optical fiber provides the bandwidth required for high-speed transmission of voice, data, and video the world depends upon for the way we live, work, and play. Today, there are more than 1.6 billion kilometers of fiber installed around the globe.

This breakthrough work established the optical fiber category. There were no similar achievements at the time of the invention. In recognition of this achievement, the three scientists responsible for inventing low-loss optical fiber – Dr. Robert Maurer, Dr. Peter Schultz, and Dr. Donald Keck – have been inducted into the Inventors Hall of Fame and were awarded the National Medal of Technology.

Dyer, Davis, and Daniel Gross. The Generations of Corning: the Life and times of a Global Corporation. New York, NY: Oxford UP, 2001.

Graham, Margaret B. W., and Alec T. Shuldiner. Corning: and the Craft of Innovation. Oxford: Oxford UP, 2001.