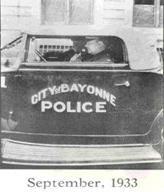 In 1933, the police department in Bayonne, New Jersey initiated regular two-way communications with its patrol cars, a major advance over previous one-way systems. The very high frequency system developed by radio engineer Frank A. Gunther and station operator Vincent J. Doyle placed transmitters in patrol cars to enable patrolmen to communicate with headquarters and other cars instead of just receiving calls. Two-way police radio became standard throughout the country following the success of the Bayonne system.

The plaque can be viewed in Bayonne, New Jersey, in the municipal park at the corner of 26th St. and Ave. C.

In March 1933, the first two-way AM mobile radio was installed in a patrol car of the Bayonne Police Department. The system was designed by Lieutenant Vincent J. Doyle of the Bayonne Police and radio engineer Frank Gunther. Through the use of a combined transmitter and receiver in the patrol car, the two-way system allowed communication between patrol cars and with the police station.

The Bayonne system was developed less than five years after the deployment of the one-way AM mobile-radio system by the Detroit Police Department. On April 7, 1928, the Detroit Police commenced regular one-way radio communication with its patrol cars, using a system developed by Patrolman Kenneth Cox and Robert L. Batts, an engineering student. This system proved the practicality of land-mobile radio for police work and led to its adoption throughout the county.