Sir Chandrasekhara Venkata Raman, Nobel-laureate (Physics-1930), assisted by K S Krishnan at IACS, Calcutta, India, discovered on 28 February 1928, that when a beam of coloured light entered a liquid, a fraction of the light scattered was of a different colour, dependent on material property. This radiation effect of molecular scattering of light bears his name as ‘Raman Effect’, from which many applications in photonic communications and spectroscopy evolved.

(The plaque may be viewed at the main entrance gate of the Indian Association for the Cultivation of Science, Raja Subodh Mullick Road, Kolkata, 700032, INDIA.) 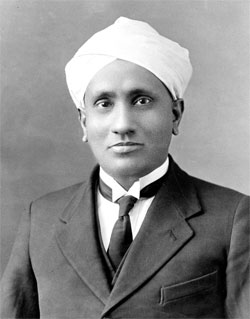 Sir C. V. Raman was a remarkable personality in science. His sixty seven years of scientific life was filled to the brim of which twenty six years he worked at Indian Association for the Cultivation of Science (IACS), Calcutta - the golden era described by Professor Raman. During the period he not only did pioneering work in the different branches of Physics including the well-known scattering of light but also he was the founder of a school of Physics by attracting a band of devoted and brilliant workers from different parts of the country. Professor Raman was awarded the coveted Nobel Prize for the effect named after him in 1930. Working at IACS he discovered that when a beam of coloured light entered a liquid, a fraction of the light scattered by that liquid was of different colour. He then showed that the nature of the coloured scattered light was dependent on the type of the sample present. In his 1930 Nobel lecture he remarked “… the character of the scattered radiation enable us to obtain an insight into the ultimate structure of the scattering substance….the new field of spectroscopy has unrestricted scope in the problems, relating to structure of matter. We may also hope that it will lead us to a further understanding of the nature of light and interaction between light and matter”. The Raman Effect is a major piece of evidence in favor of the quantum theory. The universality of phenomenon and the advent of laser have made Raman spectroscopy the basic tool in most branches of science and medicine. The Raman Effect is a fundamental nonlinear phenomenon of interest in engineering, nonlinear physics, and applied mathematics, and it may lead to important practical applications as well as to the progress of fundamental nonlinear science. The applications of Raman technologies may be mentioned; such as frequency conversion, the design and development of novel approaches, like the implementation of long distance quasi-lossless transmission schemes, fundamental aspects of nonlinear optics, the interaction of the Raman effect with parametric processes like Four-wave mixing, and how this can be controlled to increase the efficiency of super-continuum radiation generation. The possibility of shifting energy from one frequency to another using the inherent properties of the material is a very attractive one, and in the field of optical communications it finds its most immediate application in the development of Raman amplifiers.
Raman spectroscopy, which uses a laser, can be used for detecting chemicals at a distance up to 30 meters. This has important applications for safety, anti-terrorism, HAZMAT response, and other uses.