Reception of First Communication to Earth from a Human Walking on the Moon, 1969

Parkes radiotelescope and Honeysuckle Creek stations in Australia received voice and video signals from the Apollo 11 moonwalk, which were redistributed to millions of viewers. Parkes' televised images were superior to other ground stations, and NASA used them for much of the broadcast. One of the first to use the newly developed corrugated feed horn, Parkes became the model for the NASA Deep Space Network large aperture antennas.

The NASA Honeysuckle Creek station [1] no longer exists although the site where it was located is marked. As this is out of the way for visitors, a suitable place to highlight the event and locate the IEEE Milestone plaque is at Parkes. The milestone plaque is to be placed on a plinth in the grounds of the Parkes Observatory Visitor’s Centre. There is currently a sandstone monument pillar/obelisk in the grounds, which is 420mm wide, and the vertical height on the front surface is 850mm. This is to designate the site as a National Engineering Landmark by the Institution of Engineers Australia. Their plaque sits atop of the pillar on the sloping surface that is 305mm x 205mm. If the existing pillar were to be used, the IEEE plaque would need to be cast in portrait orientation. 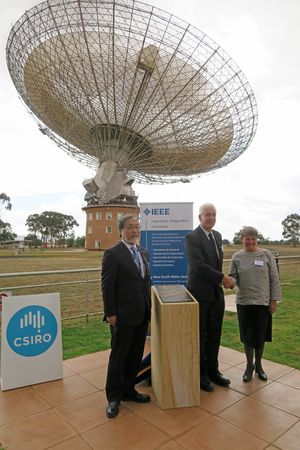 A caretaker and CSIRO staff are present at the site as the telescope is an operational observatory that operates 24 hours a day, every day of the year. The Observatory Visitors Centre is open to the public 7 days a week from 8am to 4.30pm. For information see http://www.parkes.atnf.csiro.au/ .

The historic achievement On the 20th of July 1969 (CST) two United States astronauts, Neil Armstrong and Buzz Aldrin disembarked from their lunar module and stepped onto the surface of the moon. The third man, Mike Collins, remained in the command module, which continued to orbit the moon, and from which the lunar module undocked for the descent to the lunar surface. The first man out of the lunar module, and onto the lunar surface was Neil Armstrong [1]. Many consider this to be one of humanity’s greatest achievements. In coming in to land, the lunar module, piloted expertly by Armstrong, skirted over a boulder field and landed at a different location than had been originally planned. He called this spot Tranquility Base which is in the Sea of Tranquility. After Armstrong and Aldrin had landed and had checked out all systems, the intention was for them to rest for about 8 hours and then explore the surface nearby. By that time the Moon would have set at Goldstone, California, but would have been high overhead at Parkes, NSW, in an ideal position to receive the signals from the Moon. Understandably, the astronauts were excited and keen to get out and explore, so sleep was out of the question. Consequently, Armstrong exercised his option for an earlier than planned moonwalk. Since he came out early, the Moon was still above the horizon at Goldstone and just on the verge of rising at the 30° elevation limit, at Parkes. Consequently. as Armstrong stepped on to the Moon, the TV signals from the Lunar Module, were received simultaneously at three tracking stations. They were the 64-metre Goldstone antenna in California, the 26-metre antenna at Honeysuckle Creek near Canberra in Australia [2], and the 64-metre radio telescope at Parkes [3]. At the beginning of the broadcast, NASA alternated between the signals being received from its two stations at Goldstone and Honeysuckle Creek, searching for the best quality picture. A little under nine minutes into the broadcast, the TV was switched to the Parkes signal. As the quality of the TV pictures from Parkes was superior, NASA stayed with Parkes as the source of the TV for the remainder of the two- and half-hour moon walk. Although the Parkes antenna had the bigger collecting area for receiving, according to Tink [4] the dish could not tip below 30° elevation, so it was not capable of receiving a strong signal for the first eight minutes of the moonwalk. Therefore, as Armstrong set foot on the moon and then uttered the now iconic phrase, “one small step for man, one giant leap for mankind”, the TV pictures from the moon were being received by NASA's antenna at Honeysuckle Creek near Canberra [4]. Shortly afterwards, the Moon rose high enough for the Parkes Radio Telescope to receive the signals clearly. From then on, it provided the TV signals for one of humanity's most significant achievements, namely the first men walking on the moon. Humanity was able to witness this signal moment in history, with the greatest possible clarity, thanks to the Parkes Radio Telescope. The TV pictures were distributed to 600 million people watching it live around the world. The TV was finally switched off by the astronauts, just over 5 hours later, and 2 ½ hours after the end of the moon walk. It is because of this historic episode as well as the major technical achievement, which allowed this to happen, that we consider the Parkes Radio Telescope location should be an IEEE Milestone. As the event took place in Australia on the 21st July (AEST), the plaque at Parkes should carry this date.

It was the first time a human being had stepped out onto an extraterrestrial body and communicated with Earth while doing that.

Images as the following file. 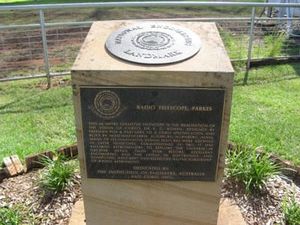 Sandstone pillar in the grounds of the Parkes observatory Visitor’s Centre. 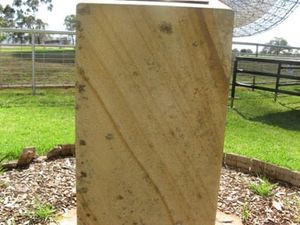 Vacant space on the pillar potentially for IEEE Milestone plaque. 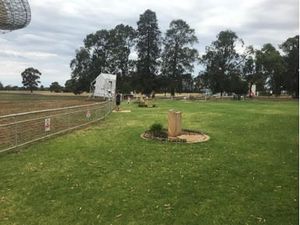 Existing monument arrangements in the Visitor Centre grounds (the VC building is to the right in the photo and the telescope is to the left both are just out of shot). 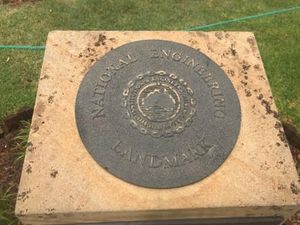 The Institution of Engineers Australian national landmark recognition of the Parkes site. 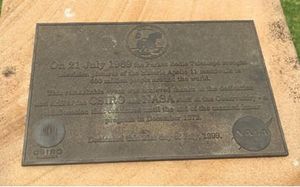 The reason for the landmark.