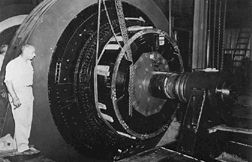 The Panama Canal project included one of the largest and most important electrical installations in the world early in the 20th century. The use of 1022 electric motors with an installed capacity of 28,290 horsepower largely replaced the steam and water powered equipment then in common use. Reliability and safety were also engineered into the innovative electrical control system, enabling remote lock operation from a central location.

The milestone plaque may be viewed at the Panama Canal Administration Building, Balboa, Panama.

The construction of the Canal was considered the world's greatest engineering work at the time. The project was begun by the French in 1876 with the formation of a society to survey Central America for the purpose of building an inter-oceanic canal. It was determined that Panama would provide the best opportunity for success. The first shovel of soil was turned on 1 January 1880. By 1884 there were as many as 19,000 workers on site. They suffered many obstacles including disease and funding, and in 1889 all activity ceased.

The United State canal construction began in 1904, after it acquired the French company's assets and concessions. Sanitation was one of the first issues to be addressed and solved. Communications were improved with new telegraph and telephone systems. It was estimated (by John F. Stevens, Chief Engineer) that it would take a minimum of 8 years to complete a lock canal (1914) and a sea level canal in 18 years (1924).

Electric power was chosen as the most dependable and economical form of power for the operation of the construction plants for the locks, with their cement mixers, stone crushers, cranes, cable ways, automatic locomotives, pumps, etc. Electrical engineer Edward Schildhauer, AIEE Fellow (1913), designed the powerful gate operating mechanism. Each 20 foot diameter gate, is powered by an electric motor. Lock operations required over 1,000 electric motors, as all controls were electric.

Electric motors had already proven to be the most reliable form of power to drive the pumps and other equipment. Alternative forms of power, such as animal, compressed air, and steam had been previously considered and discarded. All the power required for the operation of the two Construction Plants, one located at Gatun and the other at Miraflores, was generated on site. Each plant was fitted with three Curtis steam turbines, 1.5 MW each. They operated at 2,200 volts, 25 cycles, and were connected through a 44 kV double circuit electric line that crossed the Isthmus.

After its opening in August of 1914, the new Gatun Hydroelectric Plant provided the electric power required for the operation of the Canal. The construction plant and its steam turbines located at Gatun were shut down; the one at Miraflores was kept as a backup source of power in case of transmission problems.

After 88 years of uninterrupted service, the Canal continues to provide highly reliable service due, in large part, to its electrical equipment.