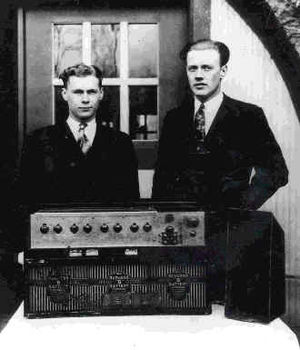 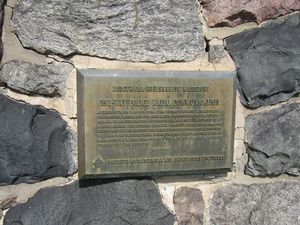 At this site on April 7, 1928 the Detroit Police Department commenced regular one-way radio communication with its patrol cars. Developed by personnel of the department's radio bureau, the system was the product of seven years of experimentation under the direction of police commissioner, William P. Rutledge. Their work proved the practicality of land-mobile radio for police work and led to its adoption throughout the country.

The plaque can be viewed in the Harbormaster Station on Belle Island of Detroit, Michigan, U.S.A., at the front south-west corner near the main entrance door to the building.

In the 1920s gangster era, bank robbers and bootleggers made clean getaways time after time, to the great consternation of police. For this was before reliable mobile-radio communications existed, communications that could have quickly dispatched patrol cars to the scene of the crime.

But in 1928, a dedicated Detroit patrolman and an electronics buff devised the first successful one-way radio link between police headquarters and cruisers. Critical news of crimes in progress could now be transmitted from the stationhouse to police cars as they drove.

Electronics was a fledgling science when Detroit Patrolman Kenneth Cox and Robert L. Batts, an engineering student, built a stable radio receiver and antenna system. Their successful one-way radio, coming after years of trial and error, was installed in April 1928. The Detroit Police Department made history as the first to dispatch patrol cars regularly by radio. Many city police departments shortly followed suit with their own systems.

Imagine driving along, listening to music on your car radio. All of a sudden, someone starts reading, on the air, a list of stolen vehicles. That's how the first police radio system in the world operated, and it operated in Detroit.

Between 1921 and 1927, radio buffs Kenneth R. Cox, Walter Vogler and Bernard Fitzgerald, all Detroit police officers, experimented with radio sets they had Installed in the back seat of a Model T Ford police patrol car.

The receivers picked up signals, but not very consistently. Frequently, broadcasts would fade out as the car passed large buildings or under railroad bridges. Also, police had no designated band on which to broadcast, so the system operated like any radio station. The station was appropriately called KOP.

KOP was listed officially as an entertainment station. To meet FRC (Federal Radio Commission, predecessor of the FCC) licensing requirements, police officers broadcast recorded music in between lists of stolen vehicles and descriptions of missing children.

Persistent work by Cox and Robert Batts led to the development of an improved receiver in 1927. A broadcasting station, W8FS, was set up on Belle Isle and regular dispatches began in 1928. (from Detroit Free Press, Thursday, May 7, 1987)