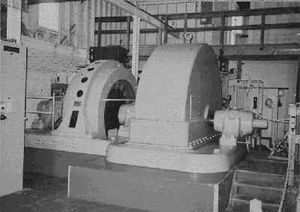 Built by the Redlands Electric Light and Power Company, the Mill Creek hydroelectric generating plant began operating on 7 September 1893. This powerhouse was foremost in the use of three-phase alternating current power for commercial application and was influential in the widespread adoption of three-phase power throughout the United States.

The plaque may be viewed at the Mill Creek Hydroelectric site, 7 miles east of Redlands, California on Mill Creek Road.

When the Mill Creek No.1 project began generating electricity on September 7, 1893, it was the first commercial use of 3-phase alternating current generators in the United States. The power from this 250 kW generator was transmitted 7.5 miles to the city of Redlands at 2400 Volts. The electricity was used for both lighting for the city of Redlands and a nearby ice house. The people of Redlands enthusiastically welcomed the new energy source and within 2½ years an additional generator had to be installed to accommodate the growing demand.

Before the Mill Creek No.1 Power House was built, the generation of electricity had generally been by DC (direct current) generators which meant that there were limitations on how far electricity could be delivered. On the other hand, the San Antonio Canyon Powerhouse used 1-phase AC (alternating current) sources. Single phase motors of this era required elaborate means to start and synchronize the motors. The success of the 3-phase generators at the Mill Creek No. 1 was apparent, for these original generators were used until 1934. Although the original units have been replaced, this plant is still in operation to this day. Today, more than 100 years after Mill Creek' completion. 3- phase generators are still the primary form of power generation around the world.