GMRT, consisting of thirty antennas of 45 m diameter each, spanning 25 km near Pune, India, is one of the largest and most sensitive low frequency (110–1460 MHz) radio telescopes in the world. It pioneered new techniques in antenna design, receiver systems, and signal transport over optical fibre. GMRT has produced important discoveries in domains such as pulsars, supernovae, galaxies, quasars, and cosmology, greatly enhancing our understanding of the Universe. 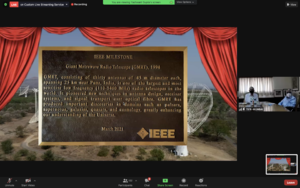 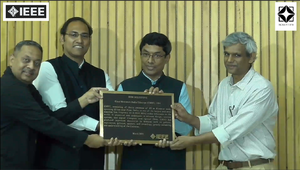 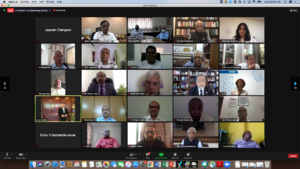 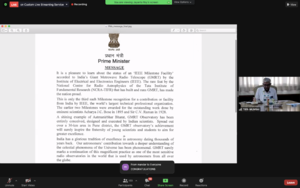 Plaque to be placed on the wall in a prominent location in the Administrative Block of the GMRT observatory. The full zoom recording of the dedication ceremony can be accessed here

It’s highly protected site, with limited access to outsiders; however, general public is allowed on specific dates and slots to visit the observatory.

Radio astronomy started at very low radio frequencies (~ 100 MHz) in the 1940s, but gradually moved to higher frequencies (~ 1000 MHz) by 1970s, due to a combination of reasons. However, there are a significant number of astrophysical problems that are best addressed at metre wavelengths. The radio astronomy group of TIFR, led by Prof. Govind Swarup, was one of the first to realise this, and proposed the GMRT in the late 1980s. After completion of acquisition of the land in 1990, work on the construction of the GMRT started in 1991, and the first antenna was erected in 1993.

The first light signal astronomical observation was conducted with the GMRT in 1994, which verified the basic functioning of the antennas and the main receiver system. Erection of all the 30 antennas was completed by 1995, even as regular commissioning activities for the different receiver systems continued alongside, and various test observations of astrophysical objects were carried out from early 1996 onwards. The first high quality image of a radio galaxy was made with the GMRT in 1996. Regular astronomical observations started in 1997, and the milestone of the first publication of results from the GMRT in an international journal happened in 1999 (from data taken in 1998). In October 2001, the GMRT was declared an international facility, available for use by astronomers from all over the world. Some illustrations highlighting these historical milestones are appended at the end of this document and are supplied in some of the supplementary documents provided.

The GMRT was one of the first in a series of new radio observatories that heralded the renaissance of low-frequency radio astronomy from 1990 onwards. Shortly after its commissioning, new facilities such as LOFAR, MWA, LWA were conceived and started becoming operational towards the end of the first decade of this century. On the technological front, the GMRT pioneered several new ideas, and crossed some significant technological barriers. It was one of the first radio astronomy observatories to replace radio communication links with optical fibre technology to connect the antennas in the array to the central processing facility, a feature that is almost routine in all modern radio observatories. The design of the GMRT employed innovative ideas like SMART (Stretched Mesh Attached to Rope Trusses) to build very large fully steerable antennas (45 metres in diameter) that are very light (only 100 tons) and hence very economical, while still providing the required efficiency. The design of the electronics chain was also very challenging, especially the central digital signal processing system. Here, the GMRT was one of the first radio observatories to switch over to a software based implementation. The GMRT was also one of the first interferometric array telescope to also have a dedicated phased array mode to support observations of compact objects like pulsars. All of this resulted, in the 1990s, in the creation of the largest and most sensitive low frequency radio telescope in the world; a position that the GMRT has maintained over the years, supplementing it with a major technological upgrade carried out during 2012 to 2018 that keeps it on the forefront on the global scene. A list of some of the publications highlighting these technology achievements is attached along with.

The GMRT has lived up admirably to its status as the most sensitive low frequency radio telescope, producing several new and interesting scientific results and discoveries in more than 25 years or so of its operation. Presently, around 40-50 papers based on data from the GMRT are published in international journals every year. The range of science addressed by the GMRT is vast, covering many diverse topics :

In addition, the GMRT has also been used for interesting experiments in space science : for tracking critical space missions such as the landing on Mars by the Schiaparelli probe from the Exomars mission of the European Space Agency, in 2016. A publication about this is included in the list of the most important relevant publications attached, and an illustration of this is also appended at the end of this document. On the social front, in addition to leading to a renaissance of low frequency radio astronomy in the world, the GMRT has also led to a major growth of professional astronomy in India, while also spurring the growth of a vast range of technology and capability growth in the country. A large number of students and scientists have been trained on the GMRT to become world class astronomers, and a strong engineering team has grown around the building, maintenance and upgrade of the facility. Today, the success story of the GMRT is widely and proudly recognised as one of the major accomplishments by the Indian scientific community of the country, on the global stage. Recently, in 2015, the GMRT was accorded the status of a pathfinder facility for the international Square Kilometre Array (SKA) project.

The supporting texts are copyright, thus cannot be posted, but copies are on file at the IEEE History Center