On 10 August 1876, Alexander Graham Bell demonstrated on this site that the human voice could be transmitted electrically over distance. While family members spoke into a transmitter in Brantford, 13 km away, Bell was able to hear them at a receiver located here. This test convinced Bell that his invention could be used for communication between towns and could compete successfully with the telegraph. 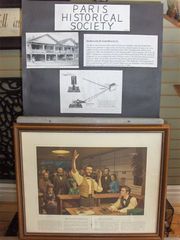 On the night of 10 August 1876, Alexander Graham Bell transmitted human voices by means of electrified wires from Brantford, Ontario, Canada, to Paris, Ontario, Canada, a distance of 13 km, firmly establishing the electric speaking telephone as an effective method of communication. Musical notes, the human voice, and songs spoken and sung were plainly audible at the other end. This was a one-way communication, sounds from Brantford were audible to Bell in Paris. This was the climax of several "distance tests" Bell had conducted in Ontario.

Bell made use of the telegraph wires of the Dominion Telegraph Company between its office in Brantford and its office in Paris. Because the battery power available at Brantford was to low for Bell's membrane telephones, the Dominion Telegraph Company provided power from Hamilton and Toronto, Ontario. Bell connected his membrane telephone and triple mouthpiece to the wires at the Brantford office, then, at the Paris office, he connected his iron box receiver. Through bubbling and crackling sounds, Bell could hear the voices from Brantford. By using high resistance electro-magnetic coils at each end of the line, the sounds were transmitted and received so distinctly that Bell could recognize the voices of the speakers.