The United States Electric Illuminating Company of Charleston started up South Carolina's first central station for incandescent lighting in October 1882 -- only one month after Thomas Edison opened his famous Pearl Street plant in New York City. In the following years, the company's parent firm was a major force in the growing electrical industry. 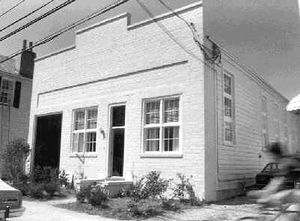 The plaque may be viewed at 94 Queen Street, Charleston, South Carolina, U.S.A. 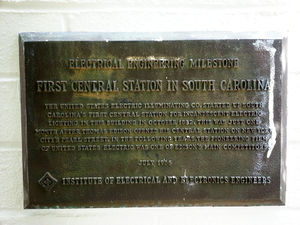 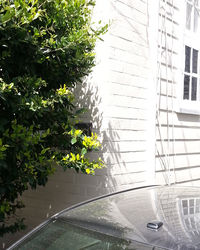 The Charleston company was organized in November 1881 for the purpose of "lighting cities, streets, stores, houses, buildings, warehouses, roads, avenues, etc., by the electric light, and for the sale of electro-motors, electro-plating machines and other electric apparatus." The organizers, a group of Charleston businessmen, studied the systems of electric lighting on the market and selected that of the United States Electric Lighting Company (USEL) of New York as the best one for arc and incandescent lighting. The Charleston company was then granted the sole license in South Carolina, North Carolina, Georgia, and Florida for the patents of its parent firm, the USEL.

Founded in 1878 by the prolific inventor Hiram Maxim, the USEL soon established itself as Thomas Edison's chief rival in the field of incandescent lighting. The company made some of the earliest installations of this new technology using Maxim's patent on a carbon-filament lamp, which was similar to that invented by Edison in 1879. When Maxim left USEL in 1881 to pursue other lines of invention, the company purchased the Weston Electric Lighting Company in Newark, NJ, and the services of its founder Edward Weston. The inventor of a successful arc-lighting system, Weston, as works manager and chief designer of USEL, developed a comprehensive arc and incandescent system which the USEL began to market in 1882.

The United States Electric Illuminating Company of Charleston was one of the first of the local firms formed to utilize this system. The company was headed by Frank S. Rodgers, a cotton dealer, as president, and Benjamin F. McCabe, a cotton press operator and real estate developer, as vice president and supervisor. Directors included a president of the Bank of Charleston and the local newspaper, an attorney, and other prominent businessmen.

The company purchased land at 94 Queen Street in Charleston in the summer of 1882 and completed the central-station building by the first of September. The plant began operating in October 1882 with a capacity of 60 arc and 200 incandescent lamps (Edison opened his Pearl Street Station in New York City in early September). Within a year, the Charleston company gained numerous private customers, strung wires along several streets and wharves, illuminated the exhibition room of Agricultural Hall, and supplied power to two nearby textile mills. The company also demonstrated its system of are lighting on a street in Charleston in 1883. The City Council, however, voted to retain gas lighting -- thus sealing the fate of the United States Electric Illuminating Company of Charleston. The company went out of business in 1884, and Charleston was not electrified again until two years later, when contracts were given to light principal streets by electricity and side streets by gas.

The building at 94 Queen Street was occupied by a variety of businesses until 1983, when it was renovated and made into an apartment building. The structure, which retains its original truss construction and much of its 19th- century exterior, is one of the few surviving artifacts of the pioneering United States Electric Lighting Company.