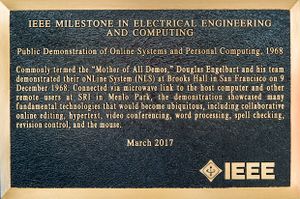 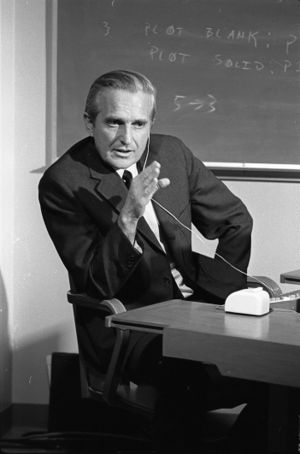 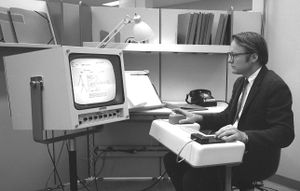 Demo Prep at SRI: Bill English (who did design and setup of the Demo) 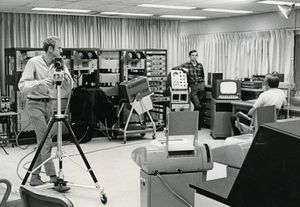 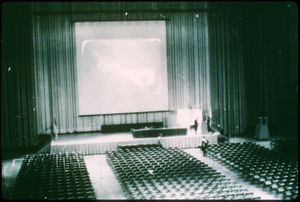 San Francisco Civic Auditorium, prior to the Demo 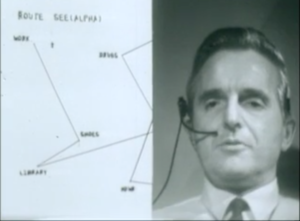 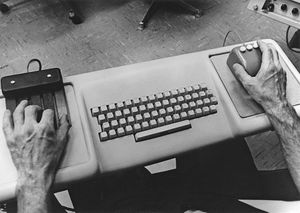 Engelbart's keyset, keyboard and mouse as used during the Demo 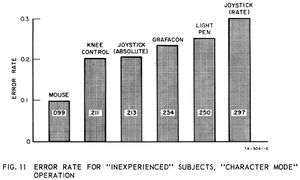 1965 SRI Report to NASA: excerpt showing the ease of use of a mouse 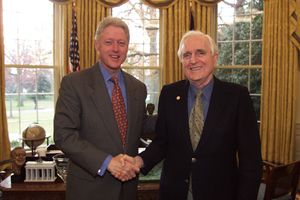 Pres. Bill Clinton with Engelbart (Dec. 2000) upon his receipt of the National Medal of Technology

Commonly termed the "Mother of All Demos," Douglas Engelbart and his team demonstrated their oNLine System (NLS) at Brooks Hall in San Francisco on 9 December 1968. Connected via microwave link to the host computer and other remote users at SRI in Menlo Park, the demonstration showcased many fundamental technologies that would become ubiquitous, including collaborative online editing, hypertext, video conferencing, word processing, spell checking, revision control, and the mouse.

Please note: the wording "at Brooks Hall in San Francisco" should actually read "at the San Francisco Civic Auditorium"

Helping catalyze a fundamental switch in the way computers are used, i.e. as communication and knowledge navigation devices rather than primarily for calculation. A variety of technologies were shown in this demo that made their way into later computing systems - video conferencing, hypertext, collaborative editing, mice, GUIs, etc. Many of these would go on to influence the Xerox PARC Alto and later the Macintosh and Windows operating systems.

The phrase "Mother of All Demos" has entered the vernacular in reference to this event, and especially when used in the computing community, is recognized as referring to this event. "Demo" in this case being short for "demonstration" (as opposed to "demolition," which it can mean in civil engineering or architectural contexts).

The practical obstacles were getting funding for such radical ideas, assembling the world-class hardware and software engineers needed to make them a reality, and developing the actual software and hardware given that most of the main elements needed to be invented or at developed from scratch. The main obstacle, however, was one of attitude: the mainstream computer science community and industry of the era did not see communication and knowledge navigation as a practical or cost-effective application for computers

It's difficult to think of any comparable achievements; this short demo gave a (working) glimpse of the major end-user computing technologies of the next twenty-five-plus years.

The paper for the demo ("A Research Center for Augmenting Human Intellect "): http://www.dougengelbart.org/pubs/augment-3954.html

Stanford event 1999, "Engelbart's Unfinished Revolution." Video of event at archive.org, URL for 1 of over 20 segments: https://archive.org/details/XD1901_1EngelbartsUnfinishedRev30AnnSess1

The Douglas Engelbart Institute page on the demo: http://www.dougengelbart.org/firsts/dougs-1968-demo.html

"The Mother of All Demos", Salamanca, Claudia, Proceedings of the Digital Arts and Culture Conference, 2009, deconstructing the presentation and its impact