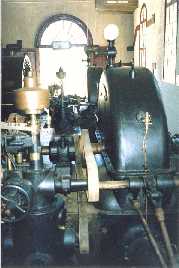 The 1897 430 kW Chivilingo Plant was the first hydroelectric plant in Chile and the second in South America. A 10 km line fed the Lota coal mines and the railway extracting minerals 12 km from shore under the sea. It represented a new key technology and a new source of electrical energy in the region as a tool for economic development. Chivilingo demonstrated the advantages of industrial use of electricity and hastened its widespread adoption in Chile.

The plaque can be viewed at the Chivilingo plant, 14 km south of the town of Lota, Chile.

Studies on the feasibility of building a hydro plant in the site were initiated in 1893. The increasing need for power that was cheaper and easily adapted to mine underground use drove the Lota coal mine company to develop a study of alternatives for this purpose. Engineer William E. Raby traveled to the United States and Europe to assess the use of electricity generation and transmission. The availability of the Chivilingo hydro resources arose as a better alternative to a steam plant. Electricity for driving motors for coal mine exploitation under the sea had many advantages over other sources of power (coal included). Alternating current to feed three phase motors was seen as the most economic, easily managed, and less prone to accidents, solution for work power inside the mines.

An international tender was made, with proposals requested to the main US and German consultant firms, for both the hydraulic and electric installations. Total freedom was given in relation to power transmission system to be used. A Pelton turbine was specified as a requirement. The civil works and the aqueduct were to be built by the Lota company.

Work to build the Chivilingo power station started in 1896 and it was inaugurated in 1897. It was the first hydroelectric power plant in Chile and the second in South America.

Thomas A. Edison supposedly designed the plant. The North American company Consolidated Co. built it and the electrical equipment was provided by Schuckert & Co., from Nürnberg, Germany.

The "El Sur" newspaper brought the news to all of Chile and helped to inform other countries in the region.The plant was in operation for 78 years (from 1897 to 1975), in its later years interconnected to the main Chilean Central Interconnected System.

Chivilingo was declared a historical monument by the government of Chile on 25 October 1990, and published in the Official Gazette (Diario Fiscal) Number 33837 on 6 December 1990.