The plaque and an original Ampex VRX-1000 are next to each other in the Green Library, which is open to the public.

Stanford has its own police force which enforces campus security. 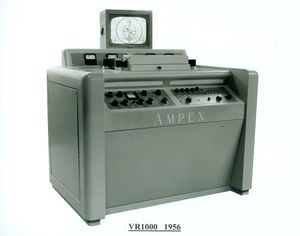 Ever since the advent of public television there has been a need to record TV programs. Archiving, delayed transmission to accommodate time zones and editing are some of the reasons for this desire. At the beginning of public television in the middle of the 1940s until 1956 the only means available for the recording of TV was film (movie film). For accommodating transcontinental time zones in the United States it was necessary to record a program for the Eastern Time zone and replay the program at the appropriate time for each time zone across the country. (The same method was used in other countries around the world.) Fortunately, the industry was able to install a transmission line across the country which made it possible to send live programs with pickoff points along the way in various time zones.

The method used was to pick the undelayed televised program off the transmission line and display it on a TV monitor while pointing a movie camera at that monitor, thus making a film record of the program. Next, the film was rushed to a film-developing lab for rapid development and returned to the TV station where the film would be edited and at the appropriate time projected into a TV camera and that video signal broadcast into the surrounding area for local TV sets to receive. Some time zones might have only one hour to record, develop and transmit a program whereas other zones might have three hours for that process.

The negative aspects of this whole scheme were many. To start with, film was very expensive and, of course, it could only be used once. However, it was easy to archive for future needs. Another major drawback was the quality was very poor. For higher quality, 35 mm film was used but for most programs used16mm film. Sometimes a recording was made of a live performance and the developed film mailed to the station that was going to broadcast it. This made for better quality (especially when color broadcasting became available), however, again, this was very expensive.

Several companies worked on the process of trying to record TV onto magnetic recording tape. Some of these companies in the USA were RCA, General Electric, Minnesota Mining and Manufacturing Co. and Crosby Enterprises. In Europe several companies including Bausch Gmbh and BASF were working on the process. Baird TV and BBC in England spent large amounts of money in this pursuit.

In 1951 Ampex Corp., in the United States, started a video recording project which had little enthusiasm from management but was to be a buffer by developing some experience in TV. When one of the other major companies developed the process Ampex would already have some knowledge in television recording. After about a year of development the project was put on the shelf in favor of a project in sound recording for theaters. The project was revived in September 1954 and five engineers and one machinist produced a beautiful TV recorder, which was shown at an NARTB (National Association of Radio and Television Engineers) convention in Chicago on April 24, 1956. The first production recorder was completed and put into service late in 1956. The format used became the standard throughout the world for the next twenty years.

The VRX-1000 set off a storm when it was demonstrated on April 14, 1956 at the National Association of Radio and Television Broadcasters Convention, sending RCA and all the other VTR developers back to the drawing boards. The VRX-1000 was renamed the Mark IV and sold briskly at $50,000. Ampex dominated the broadcast VTR business for a number of years to come.

The Ampex Videotape Recorder was the first successful video recorder to be exhibited and to reach the market place. Other recorders that followed the Ampex machine took licenses from Ampex or just coppied their unit illegally.

Charles P. Ginsburg, "The Birth of Video Recording", at http://www.labguysworld.com/VTR_BirthOf.htm

While not formally a proposer, we'd like to thank Fred Pfost for preparing the historical information and context above.

Notes for why the plaque text is worded as it is:

I added the word "practical" to the VTR's description, something I always did at the Ampex Museum of Magnetic Recording when describing this technology. As early as 1956, RCA, with their "television recorder", and Bing at Crosby Video, had firm plans to commercially offer their longitudinal-scan machines; either one would have been eagerly embraced by an industry desperate to end film-based kinescope recording. Either Crosby's and RCA's longitudinal scan technology would have been better than kinescopes, but both were still fundamentally impractical, with their huge reels and high tape speeds gobbling up tape stock.

The mention of the Emmy means a lot to many Americans, especially good on a public plaque like this. Even techies and some academics love show biz! I hope the plaque maker can reproduce the "registered" ® symbol for "Emmy". It's copyrighted and NARAS is picky about this. We don't want to have to recast this plaque! But have no fear: with the simple ® symbol [or (R), if the plaque guy can't cope], no one needs their permission and can freely use the name "Emmy®". s I changed the headline to "Videotape Recording" from "Videotape Recorder". The point here is the breakthrough technology, not that particular machine.

Like many American companies using "Corporation" in their formal names, it's always simply "Ampex Corporation" never "the Ampex Corporation". Typically, organizations using the word "Company" do tend to add the definite article, as in "The Selznick Company".

Especially on a generalist plaque, the day and month are not important. The year is.

The street address is also unimportant, unless you're erecting the plaque at 934 Charter (where you might just say, "At this location"), instead of at Stanford. Anyway, before Charlie Anderson, Alex Maxey, and Fred Pfost joined the team, Charlie Ginsburg, Ray Dolby, and Shelby Henderson did some very important, early R&D work at 820 Charter!

The word "videotape" is an adjective, while "video tape" is the recording medium.