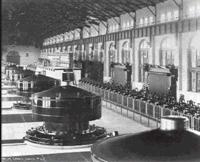 When the Adams Plant went into operation on August 26, 1895, it represented a key victory for alternating-current systems over direct-current. The clear advantage of high voltage AC for long distance power transmission and the unprecedented size of the plant (it reached its full capacity of ten 5,000-HP generators in May 1900) influenced the future of the electrical industry worldwide.

On 18 May 1910, the Niagara Transformer Station of the Hydro Electric Power Commission of Ontario began collecting power from several generating stations at Niagara Falls, Ontario and began distributing power from Niagara Falls over a network of transmission lines to loads throughout southern Ontario. It was the first time that power was distributed to an entire region over a long-distance network of high voltage transmission lines.

By these events, Niagara Falls became established internationally as the birthplace of a new electric utility industry that brought the benefits of large-scale power developments to users spread over vast areas. This arrangement for the generation, transmission and distribution of electric power departed from the prevailing approach of localized developments and formed the basis of the electric utility industry as we know it today.