Milestone-Proposal:Improvements in and relating to Sound-transmission, Sound-recording and Sound-reproduction systems by Alan Dower Blumlein

This proposal has been submitted for review.

Is the achievement you are proposing more than 25 years old? Yes

Is the achievement you are proposing within IEEE’s fields of interest? (e.g. “the theory and practice of electrical, electronics, communications and computer engineering, as well as computer science, the allied branches of engineering and the related arts and sciences” – from the IEEE Constitution) Yes

Did the achievement provide a meaningful benefit for humanity? Yes

Was it of at least regional importance? Yes

Has an IEEE Organizational Unit agreed to pay for the milestone plaque(s)? Yes

Has an IEEE Organizational Unit agreed to arrange the dedication ceremony? Yes

Has the IEEE Section in which the milestone is located agreed to take responsibility for the plaque after it is dedicated? Yes

Has the owner of the site agreed to have it designated as an Electrical Engineering Milestone? Yes

Year or range of years in which the achievement occurred:

Title of the proposed milestone:

Plaque citation summarizing the achievement and its significance:

Alan Dower Blumlein filed a patent for a two-channel audio system called “stereo” on 14 December 1931. It included a "shuffling" circuit to preserve directional sound, an orthogonal “Blumlein Pair” of velocity microphones, the recording of two orthogonal channels in a single groove, stereo disc-cutting head, and hybrid transformer to mix directional signals. Blumlein brought his equipment to Abbey Road Studios in 1934 and recorded the London Philharmonic Orchestra.

In what IEEE section(s) does it reside?

IEEE Organizational Unit(s) which have agreed to sponsor the Milestone:

Please note: your email address and contact information will be masked on the website for privacy reasons. Only IEEE History Center Staff will be able to view the email address.

Describe briefly the intended site(s) of the milestone plaque(s). The intended site(s) must have a direct connection with the achievement (e.g. where developed, invented, tested, demonstrated, installed, or operated, etc.). A museum where a device or example of the technology is displayed, or the university where the inventor studied, are not, in themselves, sufficient connection for a milestone plaque.

Are the original buildings extant?

Details of the plaque mounting:

Outside of building on front face above or alongside the main entrance to the Abbey Road Studios.

How is the site protected/secured, and in what ways is it accessible to the public?

The plaque will be firmly secured to the outside of the building. Visitors can view the plaque from Abbey Road and will not need access to the studios.

Who is the present owner of the site(s)?

A letter in English, or with English translation, from the site owner(s) giving permission to place IEEE milestone plaque on the property:

A letter or email from the appropriate Section Chair supporting the Milestone application: 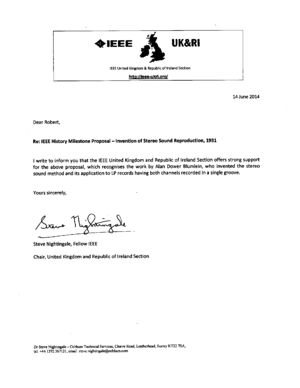 What is the historical significance of the work (its technological, scientific, or social importance)?

The historical significance of this work is that Alan Blumlein developed a single track, 2 channel recording system. Although he used the available methods of Hill and Dale & Lateral Cutting to achieve groves at 90 degrees to each other, he specified that 45/ 45 cutting system would have significant advantages. Within his patent, he went into great detail about the technology involved with the problems associated with sound reproduction and interpretation by the human brain.

What obstacles (technical, political, geographic) needed to be overcome?

Obstacles to be overcome included the fact that at the time of going to patent, shellac discs were used for commercial reproduction of recordings and better materials had to be developed. Shellac had limitations due to its use as a workable material and its poor reproductive qualities meaning that Shellac discs would not permit the playback of high quality sound.

Electrical reproduction in the home was often opposed as to the amount of equipment required.

EMI had a focus on the development of television

What features set this work apart from similar achievements?

Future development in the use of sound recording and reproduction for film was also covered in the patent.

References to establish the dates, location, and importance of the achievement: Minimum of five (5), but as many as needed to support the milestone, such as patents, contemporary newspaper articles, journal articles, or citations to pages in scholarly books. At least one of the references must be from a scholarly book or journal article.

Supporting materials (supported formats: GIF, JPEG, PNG, PDF, DOC): All supporting materials must be in English, or if not in English, accompanied by an English translation. You must supply the texts or excerpts themselves, not just the references. For documents that are copyright-encumbered, or which you do not have rights to post, email the documents themselves to ieee-history@ieee.org. Please see the Milestone Program Guidelines for more information.