This proposal has been submitted for review.

Is the achievement you are proposing more than 25 years old? Yes

Is the achievement you are proposing within IEEE’s fields of interest? (e.g. “the theory and practice of electrical, electronics, communications and computer engineering, as well as computer science, the allied branches of engineering and the related arts and sciences” – from the IEEE Constitution) Yes

Did the achievement provide a meaningful benefit for humanity? Yes

Was it of at least regional importance? Yes

Has an IEEE Organizational Unit agreed to pay for the milestone plaque(s)? Yes

Has an IEEE Organizational Unit agreed to arrange the dedication ceremony? Yes

Has the IEEE Section in which the milestone is located agreed to take responsibility for the plaque after it is dedicated? Yes

Has the owner of the site agreed to have it designated as an Electrical Engineering Milestone? Yes

Year or range of years in which the achievement occurred:

Title of the proposed milestone:

Plaque citation summarizing the achievement and its significance:

In what IEEE section(s) does it reside?

IEEE Organizational Unit(s) which have agreed to sponsor the Milestone:

Please note: your email address and contact information will be masked on the website for privacy reasons. Only IEEE History Center Staff will be able to view the email address.

Describe briefly the intended site(s) of the milestone plaque(s). The intended site(s) must have a direct connection with the achievement (e.g. where developed, invented, tested, demonstrated, installed, or operated, etc.). A museum where a device or example of the technology is displayed, or the university where the inventor studied, are not, in themselves, sufficient connection for a milestone plaque.

There is a mounted bust of Alexander Graham Bell in the vicinity of where the plaque will be installed.

Are the original buildings extant?

Details of the plaque mounting:

How is the site protected/secured, and in what ways is it accessible to the public?

The site is within the security perimeter of the AT&T.

Yes, visitors will have to sign in at the front desk of the facility.

Who is the present owner of the site(s)?

A letter in English, or with English translation, from the site owner(s) giving permission to place IEEE milestone plaque on the property:

A letter or email from the appropriate Section Chair supporting the Milestone application: 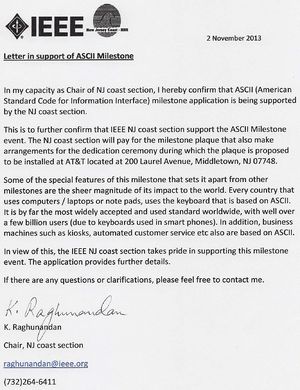 What is the historical significance of the work (its technological, scientific, or social importance)?

The American Standard Code for Information Interchange (ASCII /ˈæski/ ass-kee) is a character-encoding scheme originally based on the English alphabet that encodes 128 specified characters - the numbers 0-9, the letters a-z and A-Z, some basic punctuation symbols, some control codes that originated with Teletype machines, and a blank space - into the 7-bit binary integers. ASCII codes represent text in computers, communications equipment, and other devices that use text. Most modern character-encoding schemes are based on ASCII, though they support many additional characters. ASCII developed from telegraphic codes. Its first commercial use was as a seven-bit teleprinter code promoted by Bell data services. Work on the ASCII standard began on October 6, 1960, with the first meeting of the American Standards Association's (ASA) X3.2 subcommittee. The first edition of the standard was published during 1963, a major revision during 1967, and the most recent update during 1986. Compared to earlier telegraph codes, the proposed Bell code and ASCII were both ordered for more convenient sorting (i.e., alphabetization) of lists, and added features for devices other than teleprinters. ASCII includes definitions for 128 characters: 33 are non-printing control characters (many now obsolete) that affect how text and space are processed and 95 printable characters, including the space (which is considered an invisible graphic). The IANA prefers the name US-ASCII to avoid ambiguity. ASCII was the most commonly used character encoding on the World Wide Web until December 2007, when it was surpassed by the ASCII-derived UTF-8

What obstacles (technical, political, geographic) needed to be overcome?

This was a pioneering effort in getting to an agreement in the face of then incumbent interests in the various proprietary approaches to character encoding.

What features set this work apart from similar achievements?

This effort brought about an agreement on standards used across telecommunication and computer industries. It endured through worldwide implementation over decades and continues to be included in the UTF-8 coding which superseded ASCII.

References to establish the dates, location, and importance of the achievement: Minimum of five (5), but as many as needed to support the milestone, such as patents, contemporary newspaper articles, journal articles, or citations to pages in scholarly books. At least one of the references must be from a scholarly book or journal article.

Supporting materials (supported formats: GIF, JPEG, PNG, PDF, DOC): All supporting materials must be in English, or if not in English, accompanied by an English translation. You must supply the texts or excerpts themselves, not just the references. For documents that are copyright-encumbered, or which you do not have rights to post, email the documents themselves to ieee-history@ieee.org. Please see the Milestone Program Guidelines for more information.