In the space below the line, please enter your proposed citation in English, with title and text. Text absolutely limited to 70 words; 60 is preferable for aesthetic reasons. NOTE: The IEEE History Committee shall have final determination on the wording of the citation[edit source]

Please also include references and full citations, and include supporting material in an electronic format (GIF, JPEG, PNG, PDF, DOC) which can be made available on the IEEE History Center’s Web site to historians, scholars, students, and interested members of the public. All supporting materials must be in English, or if not in English, accompanied by an English translation. If you are including images or photographs as part of the supporting material, it is necessary that you list the copyright owner.

In 1951 the Massachusetts Institute of Technology undertook the development of a continental air defense system for North America. The centerpiece of this defense system was a large digital computer originally developed at MIT. The MIT Lincoln Laboratory was formed to carry out the initial development of this system and the first of some 23 SAGE control centers was completed in 1958. SAGE was the forerunner of today’s digital computer networks.

In the space below the line, please describe the historic significance of this work: its importance to the evolution of electrical and computer engineering and science and its importance to regional/national/international development.[edit source] 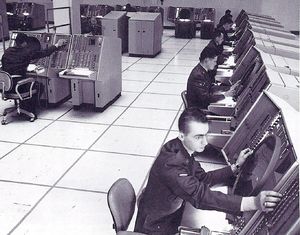 ABSTRACT - Engineers, mathematicians, scientists and technicians, from the Massachusetts Institute of Technology's Digital Computer Laboratory, the Air Force Cambridge Research Laboratory, and MIT's Lincoln Laboratory, played the key role in the development of the Semi-Automatic Ground Environment (SAGE) system, the first major real-time, computer-based command- and- control system. Designed as a new air defense system to protect the United States from long-range bombers and other weapons, the SAGE system sent information from geographically dispersed radars over telephone lines and gathered it at a central location for processing by a newly designed, large-scale digital computer. As the system evolved, SAGE broke new ground in radar, communications, computer, information display, and computer programming technologies. SAGE not only revolutionized military command-and-controls, but led to landmark advances in online systems and interactive computing, real-time computing, and data communications using modems.

SYSTEM OVERVIEW - The SAGE system used ground-based radars, sea-based radars on ocean platforms called Texas Towers, and airborne radars to detect enemy aircrafts. Digital communication links conveyed this information to command centers, where the first large real-time digital processors - novelties at the time – tracked the radar targets and guided fighter-interceptors to engage the intruding aircraft. Although Lincoln Laboratory’s primary responsibilities was to invent the needed command-and-control processes by using the newly emerging technology of digital computers, many development in radar technology were also needed to provide the “clean” data demanded by the computer.

AIR DEFENSE – THE FIRST YEARS (extracted from [1] pages 148 -151). “The first major Lincoln Laboratory effort in air defense, the Cape Cod System, was designed to integrate a surveillance net consisting of large search radars, height-finding radars, and gap-filler radars with a central digital computer (called Whirlwind) by using telephone lines for data transfer. The computer accepted target data from the radars and created tracks showing the positions and movements of the enemy aircraft. The computer then formulated a response and sent messages to the fighter aircraft so that they could intercept the target aircraft. “The first version of the Cape Cod System was fully operational in September 1953, and it demonstrated that air battles could be managed with such a system. The next step was the augmentation of the Cape Cod System to form the Experimental SAGE Subsector, which covered more of New England. The Experimental SAGE Subsector included more radars, better data processing at the radar sites, a more capable central computer (the AN/FSQ-7), and improved display and control consoles for the human operators who were an integral part of the SAGE system.

“The first radar development needed to make SAGE work was to improve the performance of moving-target-indicator circuitry, which separates the echoes of the fast-moving objects of interest, namely, airplanes in flight, from echoes of slow-moving objects such as waves on the ocean and birds, and non-moving objects such as buildings and mountains. The second radar development came from an urgent need to strengthen the ability of radar to extract information despite radio-frequency interference and jamming. Both of these developments profited from enlarged understanding of communications theory, of which radar theory is a special case, that had flowered after the end of World War II. Underlying these advances was the important development of processing devices to digitize data at the remote radar sites, and send it error-free to large central computers. SAGE was a large, distributed, digital, real-time, surveillance, communications, and command-and-control system. It was the world’s first such system, and the impact of its successful development spread far beyond its role in air defense of the United States. Some historians of science and technology consider SAGE to have been the launching pad of that economic marvel, the Boston-area electronics industry.”

WHAT FUNCTIONS WERE PERFORMED BY SAGE? [6]:

ACCOLADES FROM VARIOUS WEBSITES: A- SAGE revolutionized air defense and also contributed significantly to advances in air traffic control systems. As the SAGE system matured, the Air Force pursued the development of a number of advanced command, control, and communications systems. B- In peacetime SAGE was, for all intents, an air traffic control system. It influenced the design of the FAA’s automated control systems. C- The system also gave IBM valuable insight, and it was not long after that the CEO of American Airlines met one of the IBM people involved in SAGE by accident on a flight, and soon the two companies were developing the SABRE airline reservation system. D- Other major SAGE developments which included the CRT based real-time user interface, and use of wide-area communications via modems.

4. Robert Buderi, The Invention that Changed the World: How a Small Group of Radar Pioneers Won the Second World War and Launched a Technical Revolution (Simon & Schuster, New York, 1996).

What features or characteristics set this work apart from similar achievements?[edit source]

Retrieved from "https://ethw.org/w/index.php?title=Milestone-Nomination:SAGE_(Semi_Automatic_Ground_Environment)&oldid=70972"
This page was last edited on 31 January 2012, at 14:55.
About ETHW
Policies and disclaimers