We propose to mount the plaque on a wall near the main gate of the CBC Broadcasting Site on Mount Seymour. CBC conducts frequent tours for students and the public.  All tours include a stop at this location.

The site is located on the south slope of Mount Seymour, just below the Mount Seymour Ski Area. It is owned by the Canadian Broadcasting Corporation. The geodetic coordinates of the site are Lat: 49°21′13″N, Lon: 122°57′24″W. 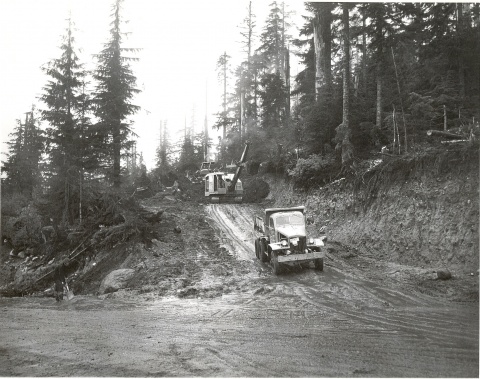 Construction of the CBC Broadcasting Site on Mount Seymour begins, 1953. 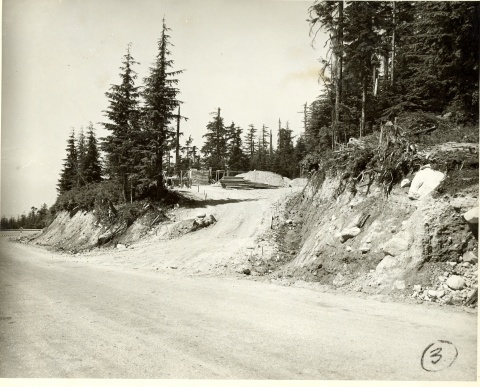 Construction of the CBC Broadcasting Site on Mount Seymour continues, 1953. 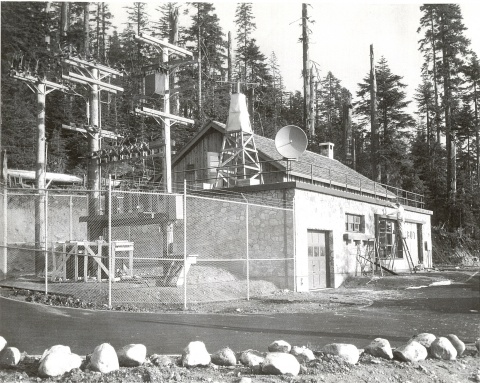 The CBC Broadcasting Site on Mount Seymour is complete - Fall 1953 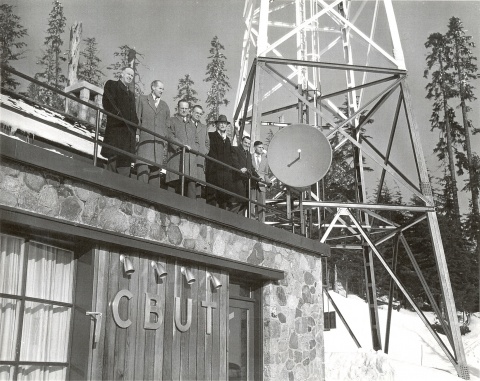 The original transmitter building burned to the ground a number of years ago and was rebuilt. The original garage, parts of the kitchen area and the original stone work from the original building were saved and are still apparent.

The logo used by CBUT - channel 2 from its commissioning in 1953 until a new system-wide corporate logo was introduced in 1976.

(Western Canada refers to the four provinces west of the Great Lakes: British Columbia, Alberta, Saskatchewan and Manitoba. It is physically separated from Central Canada (Ontario and Quebec) by the Great Lakes and the relatively inhospitable Canadian Shield.)

Broadcasting in Canada: History and Development of the National System, CBC, 1962, 92 pp.

A Brief History of the Canadian Broadcasting Corporation, CBC, 1976, 40 pp.

At the time of the first broadcast, the establishment of a television station in Vancouver was seen as an important contribution to Canadian sovereignty and cultural identity. The first broadcast and associated ceremonies were major events, as documented in

CBUT provided an important training ground for and contributed to the principles and practices that guided the engineers who went on to deploy the over 1000 public and private broadcasting sites that serve Western Canada today, as related by

Dave Newbury, Senior Manager - West, CBC Transmission, Vancouver. (Dave has been a CBC employee for 40 years. He knew many of the engineers and technicians who worked at the CBC Broadcast Site when it began operation and is very familiar with the CBC transmitting sites in Western Canada.)

Although VHF transmitting sites had already been established in Western Canada for FM broadcasting, these sites were generally located atop tall buildings in urban areas, e.g., VE9FG (later CBU-FM), a 1-kW FM broadcast station that became operational on 21 November 1947 and which was located at the Hotel Vancouver in downtown Vancouver as documented at

The three television broadcasting sites that had been established in Canada previously (in Montreal, Toronto and Ottawa) were also installed at relatively low elevations. For the CBC managers of the day, establishing the network’s fourth television transmitter so far West and at a high elevation and a remote location was a bold and significant decision.


The quality of the initial site selection and engineering is underscored by the longevity of the CBC Broadcasting Site on Mount Seymour and the large number of other television and FM broadcast transmitters that are installed in the same general area today, including:

Preservation of the Historical Record

Unlike scientific research, broadcasting is primarily a business undertaking and the companies involved have not seen fit to devote much effort to preserving the historical record. For example, the CBC disposed of much of the original documentation concerning early television broadcasting when the project group in Montreal moved to new offices some 20 years ago.

In 1967, the Canadian Association of Broadcasters established The Canadian Communications Foundation with a mandate to "commemorate throughout Canada the development of electronic communications". The Foundation was largely dormant until a group of retired senior broadcasting executives led by Ross McCreath, Lyman Potts and Peter Searle revived the organization during the 1990's. Their efforts to document the history of broadcasting in Canada resulted in the development of their official website at

While some written records still exist, the CCF has been forced (as have we) to rely on interviews with senior and retired members of the broadcasting community to fill in the details regarding the history of broadcasting in Canada.


In October 2009, we contacted Pip Wedge, Vice-President, Canadian Communications Foundation, regarding our efforts to prepare this nomination. He replied

If you think the involvement of CCF can in any way help you achieve your objectives, then of course I'll be happy to co-operate. As I've said, we don't have any historic information on CBUT beyond what is already on our site, but I'll wait to hear what you have in mind.

If the nomination is successful, we will invite CCF to help publicize it via their website and possibly to participate in the dedication ceremony.

As related above, only three television broadcast stations had been established in Canada prior to CBUT in Vancouver; all were located in Eastern Canada and all were installed at relatively low elevations. For the CBC managers of the day, establishing the network’s fourth television transmitter so far West, at a high elevation and at a remote location was a bold and significant decision.

The relatively complicated topography of the Lower Mainland of British Columbia required that considerable care be taken to choose a broadcasting site that would provide the best coverage. Predicting and evaluating the coverage of a VHF broadcast transmitter in mountainous terrain is much different from the corresponding task for the MF broadcast transmitters that had been installed at various low-level locations throughout the Lower Mainland during the 1930‘s and 1940‘s.

Please attach a letter in English, or with English translation, from the site owner giving permission to place IEEE milestone plaque on the property.