We propose to mount the plaque at the base of DRAO's 26-m radiotelescope, a prime-focus, equatorially mounted paraboloid that can observe the sky at all declinations north of -34°. Constructed in 1959, it is currently used for a variety of astronomical projects at decimetre and centimetre wavelengths. 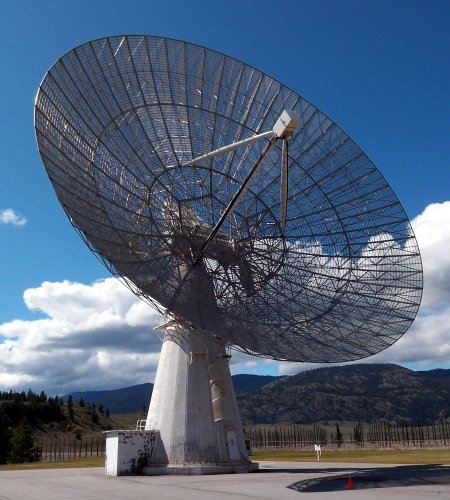 Discussions of the feasibility of interferometry spanning the continent, i.e., Very Long Baseline Interferometry or VLBI, began in 1960, and technical developments continued at various sites around the world until success was achieved in Canada in 1967. The work was originally reported in:

To the Edge of the Universe, National Film Board of Canada, 1969.

From its Canadian beginnings, VLBI has become an important technique for both radio astronomy and geodesy. It has been the central theme of over 3,500 papers in the scientific literature over the ten-year period 1999 to 2008, and the flow continues unabated.

VLBI techniques also permits the position of objects on Earth and in the solar system to be measured with millimetre accuracy with respect to the ICRF (International Celestial Reference Frame) defined by distant quasars. On 13 August 2009, the XXVII IAU (International Astronomical Union) General Assembly adopted the second-generation ICRF2 as the fundamental celestial reference frame as of 1 January 2010. A complete description of ICRF2 is available in

VLBI techniques are now routinely used: (1) to provide the basis for all terrestrial precision surveying, including the Global Positioning System, (2) to precisely track spacecraft on voyages to the planets, and (3) to make important measurements of the movement of crustal plates and to help predict earthquakes. See, for example,

Distinguishing features or characteristics of this work[edit source]

The letter is necessary in order to process your nomination form. Click the Attachments tab to upload your letter.
NRC-DRAO.pdf

Retrieved from "https://ethw.org/w/index.php?title=Milestone-Nomination:First_Radio_Astronomical_Observations_Using_VLBI,_1967&oldid=43468"
This page was last edited on 18 January 2010, at 15:17.
About ETHW
Policies and disclaimers