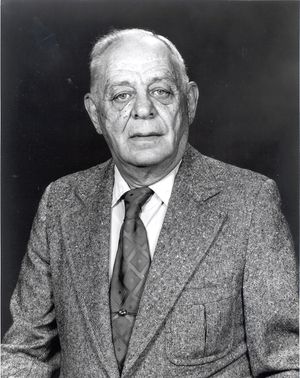 Martin Greenspan, a native New Yorker, received his bachelor's degree in engineering from Cooper Union in 1934. In 1935, he joined the staff of the National Bureau of Standards in Washington, D.C., where he has developed his career as a physicist and engineer. He has worked in the fields of elasticity and acoustics, where he made important theoretical and experiment contributions.

His earliest work involved theoretical and mathematical analyses for the distribution of stresses in civil engineering structures. The laboratory measurements he and his associates made and coordinated with theory and analysis have become landmarks in the evolution of modern engineering practices for assuring structural safety.

It was not until 1947 that Mr. Greenspan, called "Moe" by his friends, began his theoretical analysis and experimental measurements on the propagation of sound through gases. He established a data base on the velocity and absorption of sound in various gases far in advance of the analytical capabilities for sound propagation at that time. In fact, it is still in use today for evaluation of new theoretical developments.

In the early 1950's Mr. Greenspan and a fellow employee, Carl Tschiegg, developed an acoustical velocimeter for the U.S. Navy to measure the speed of sound traveling through water under rigorous conditions at sea. The device has since found various commercial as well as military applications. Mr. Greenspan served as chief of the NBS Sound Section from 1966 to 1974, supervising a comprehensive program in acoustics and also guiding the design and construction of specialized features and equipment to incorporate in the new sound laboratory, now an internationally recognized facility for research.

More recently, Mr. Greenspan, who retired from NBS in 1976 and was a consultant for the Bureau, had been involved in the development of techniques for non-destructive evaluation - the detection of defects in materials without damaging them, and medical ultrasonics, the use of high-frequency sonic waves as a therapeutic and diagnostic tool to "see" internal living tissue. He is also pursuing studies in the theoretical aspects of the measurement of the thermodynamic properties of gases by acoustic techniques,

Besides authoring over 60 papers, "Moe" has found time to teach undergraduate and graduate courses. He is a Fellow of the Acoustical Society of America (and past president), the American Physical Society, the Washington Academy of Sciences, and the American Association for the Advancement of Sciences. He has been a member of the U.S. National Committee of the International Union of pure and Applied Physics, the National Research Council, and the Governing Board of the American Institute of Physics. He received the Silver Medal in Physical Acoustics from the Acoustical Society of America in 1977 and Meritorious Service Awards (1949, 1961) from the Department of Commerce.

He and his wife, Lillian, have three children, Robert, Miriam, and Ruth. His major interests, outside of work, are music and photography.

Retrieved from "https://ethw.org/w/index.php?title=Martin_Greenspan&oldid=172295"
Categories:
This page was last edited on 4 January 2019, at 21:09.
About ETHW
Policies and disclaimers