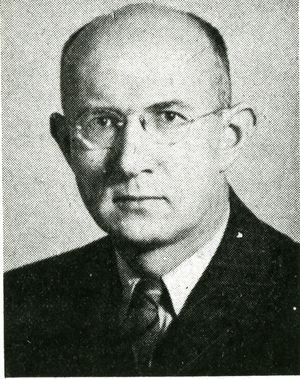 Marcel J. E. Golay (SM'51) was born on May 3, 1902, in Switzerland. He received the Baccalaureat Scientifique from the Gymnase de Neuchatel in 1920, the licenciate in electrical engineering from the Federal Institute of Technology at Zurich in 1924, and the Ph.D. in physics from the University of Chicago in 1930.

From 1924 to 1928 Dr. Golay worked on telephone cables for the Bell Telephone Laboratories. In 1930 and 1931 he worked on automatic telephone systems for the Automatic Electric Company, and since 1931 has been a member of the Signal Corps Laboratories, Fort Monmouth, NJ, working on subaqueous acoustics, terrestrial sound ranging, heat detection, radio relays, and electronic controls. He was Chief Scientist of the Squier Signal Laboratory.

In 1946 Dr. Golay disclosed a new attack on the ideal electrical filter problem and also described a new detector for infrared and short radio waves. In 1948 he announced the principle of multislit spectrometry, which alleviates the intensity problems in far infrared spectrometry. He received the Harry Diamond award in 1951.