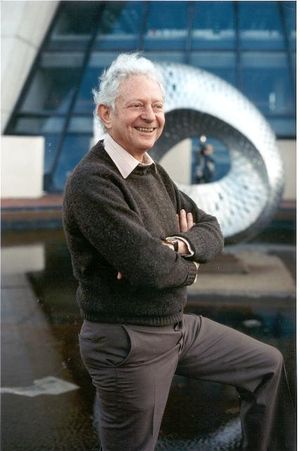 Dr. Lederman's research has spanned four decades and includes many remarkable achievements. In 1956, Dr. Lederman and his team from Columbia University discovered the long-lived neutral K-meson particle. In 1961, he and his group discovered the muon neutrino, which provided the first proof that there was more than one type of neutrino, and for which Dr. Lederman later received the Nobel Prize in Physics. In 1971, he and his collaborators discovered evidence for a new elementary particle called the "bottom quark." A broad spectrum of the innovative experiments Dr. Lederman led at Brookhaven National Laborartory, Fermilab, and the CERN Laboratory in Geneva set the paradigm for modern nuclear physics and particle physics research.

Leon Lederman has long recognized the importance of science education to the intellectual and economic health of society. While Director of Fermilab, he opened the laboratory to countries not previously associated with high energy physics, especially Latin American countries. He also initiated over 15 programs introducing topics in modern physics to high school students, elementary school teachers, and college teachers.

Dr. Lederman's vision and leadership resulted in establishment of the Illinois Mathematics and Science Academy, the first three-year state-wide residence public high school for gifted children, and the Teachers' Academy of Mathematics and Science in Chicago, where he serves as Co-Chairman of the Board. The first graduating class of the former led the nation's high schools on the American College Test and in college admissions. The goal of the Teachers' Academy is to train some 17,000 Chicago public school teachers in science and mathematics. It exposes roughly 3,000 teachers a year to the latest techniques for teaching mathematics and science to students from kindergarten through high school.

Dr. Lederman was Chairman of the Board and past President of the American Association for the Advancement of Science (1991-93). He was a member of the National Academy of Sciences. He has received more than 30 honorary degrees. Among his numerous awards are the U.S. National Medal of Science (1965), the Wolf Prize (Israel) in Physics (1983), and the Nobel Prize in Physics (1988).