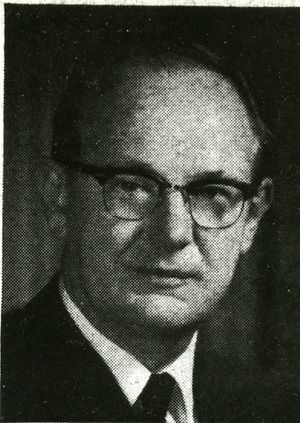 A native New Yorker, John G. Trump earned his BA in engineering from the Polytechnic Institute of Brooklyn in 1929, after which he crossed the East River to earn a PhD at Columbia University. Once out of school, Dr. Trump joined the General Electric Company for a few years, until returning to the Polytechnic Institute as assistant professor in 1936. He was promoted to associate professor in 1941 and to full professor in 1952. In his early years at MIT, Dr. Trump was engaged with Prof. R. J. Van de Graaff in the study of the voltage insulation properties of high vacuum and compressed gases, and in the application of the Van de Graaff electrostatic generator to the production of megavolt X-rays for use in medicine. He designed one of the first million volt X-ray generators used in cancer therapy for the Collis P. Huntington Memorial Hospital in Boston, Mass. This machine, first used clinically in the Spring of 1937, was followed in 1940 by a more compact 1.25 million volt X-ray unit, which remained in use for radiation therapy at the Massachusetts General Hospital for the next 15 years.

During World War II, Dr. Trump devoted his entire attention to vital war projects. In 1940, he became technical aide to Dr. K. T. Compton, then president of MIT and chairman of the radar division of the newly created National Defense Research Committee. In 1942, he was made the secretary of the Microwave Committee of the National Defense Research Committee and later was appointed the director of the British branch of the Radiation Laboratory, where he served from February 1944 until the end of the European phase of the war. During this period, he was a member of General C. A. Spaatz' Advisory Specialist Group on Radar. Then he served in MIT’s Radiation Laboratory as the assistant director in charge of Field Service. In 1947, the King of England bestowed His Majesty’s Medal on Dr. Trump for his assistance to the US Air Force and his cooperation with Britain in the field of radar. Dr. Trump was awarded the President 's Certificate of Merit in 1948 for “outstanding services to his country."

In the postwar period, Dr. Trump and his associates resumed their studies of high-voltage phenomena, the acceleration of electrons to high energies, and the interaction of such radiations with living and nonliving matter. In co-operation with the medical staff of the Lahey Clinic in Boston, an investigation was begun in 1949 on the use of 2 million volt X-rays in the therapy of malignant disease. Recently. this group has studied the direct treatment of superficial lesions with high-energy electrons. This and other work has received the support of the Godfrey M. Hyams Trust, the National Institutes of Health, the Damon Runyon Memorial Fund, and the National Science Foundation. In recognition to his contributions to the field of radiology and engineering, Dr. Trump was awarded the IEEE's Lamme Medal in 1960.

Dr. Trump contributed numerous important papers to the field of his special interests in electrical engineering and radiology. He was a fellow of the American Physical Society, Sigma Xi, and Tau Beta Pi, an associate member of the American Radium Society and the American Roentgen Ray Society, and a Fellow of the American Academy of Arts and Science. In 1946, Dr. Trump, with Dr. R. J. Van de Graaff and Dr. D. M. Robinson organized the High Voltage Engineering Corporation of which he was the chairman of the board and technical director. He was also director of Machlett Laboratories, Inc. of Springdale, Connecticut, a leading manufacturer of x-ray and high-frequency power tubes. Trump was the paternal uncle of President Donald Trump.