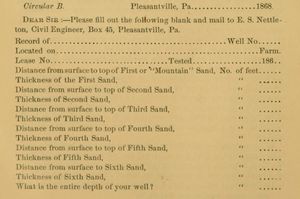 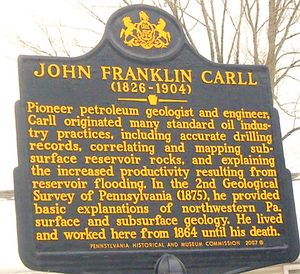 John Franklin Carll was born in a farm in Bushwick, New York, (now Brooklyn), on May 7, 1826. In his early years, before joining the petroleum business, he worked in farming, was clerical for a NY newspaper, and eventually completed his college studies, graduating as a civil engineer. He worked to build a family and his own wire manufacturing business in New York, but when he turned 38 years old, personal and professional misadventures made him leave New York to start a new life path in the small town of Pleasantville in Venango County, PA. In 1864, he joined the booming local petroleum business. He set up his petroleum firm, the Goss & Carll well, on the Hebert tract, Pleasantville, working more with the attitude of the engineer rather than the hand of the wildcatter. He became very familiar with the technical aspects of petroleum drilling and production, noted diligently his observations and collected daily records on the wells he drilled; furthermore, he focused the attention on the different rock layers pierced and crossed during the drilling operations. Consistent recording, comparisons, and the setting of a database prototype are the key elements that distinguished Carll from the crowd of the Pennsylvania oilmen.

Recording these technical aspects was not a common practice during the time of the early modern petroleum industry as drillers were more interested in recording numbers related with practical drilling operations like rate foot/hour and tools consumption and replacement. None of this data was actually correlated to the quality of the strata encountered with the finality to interpret and understand the geological sequence of the subsoil. Until the early 20th century, the study of evidence of functional petroleum systems was practically the only source of information on which drilling efforts were based: the identification of anticline folds discernible on the surface; the spotting for spontaneous petroleum, bitumen and even natural gas outcrops; the application of the so called creekology, that was the drilling of successive wells along a riverbed or creek was also used. The “wildcatters” drilling along such formations were selecting the most favorable locations for hydrocarbon accumulations in the subsurface achieving greater success, but having poor or no idea about the subsurface structure. Until those years, the drilling activity has discovered and traced the great oil-leads of the country from point to point regardless of any and all topographical features of the surface. The result of this method was that of the 5,560 wells dug in the United States from 1859 to 1869, 4,374 were dry, which in the money of the time could cost between 3,000 to 8,000 dollars - corresponding roughly to $47,000 to $125,000 in modern currency.

Carll since 1868 was actively involved to build records and datasets in the western PA Oil Regions. A bulk of firsthand and unpublished geological information on drilling sites was collected by an independent committee composed by the local petroleum entrepreneurs S. Q. Brown, George K. Anderson, J. H. Hebert, E. S. Nettleton, and Carll. A questionnaire divided in two circulars and composed of 26 questions was sent to every operator drilling in Venango County. Questions were heterogeneous and focused, for example, on the depth and thickness of the Venango sandstone, the general qualities of the petroleum bearing rocks, the color of the petroleum, and even more technical subjects like casing and power generation. One hundred and thirty-four well records were collected. The oldest well record was from the Phillips Well Number 2 drilled in 1861 on Tarr Farm near Oil Creek.

E. S. Nettleton, civil engineer, was team leader in charge to prepare the systematic collection of petroleum-well data collected until 1969. In 1970, when the committee was disbanded due to the lack of funds (it was financed from the sale of the well records to operators, which at the very end did not find the dataset produced useful), Nettleton turned that material to Carll, who merged it with his own older observations and started to create a functional database.

By 1874, Carll was already a well-established expert on the local petroleum business. He was assigned by the director of the Second Geological Survey of Pennsylvania,[1] Joseph Peter Lesley,[2] to lead a team of geologists in charge to study and unfold the geology and mineral resources of the western Pennsylvania petroleum lands. Upon his appointment to the Survey, Carll went into the field together with F. A. Hatch, a civil engineer since December 10th, 1874. They endeavored to get a correct overview of the stratification of the petroleum bearing rocks from both published and unpublished well-records randomly provided by different drillers or well owners; data too often influenced by their individual theories or pecuniary interests. As result of that, they spent several field sessions running topographic surveys because the elevations and many other data provided by the local operators revealed to be not reliable. Carll and Hatch soon were discouraged at whole situation and agreed that rather than cover every single well with possibly corrupted data, it was better to build few representative sections in each locality, and utilizing the records they personally performed.

Retrieved from "https://ethw.org/w/index.php?title=John_Franklin_Carll&oldid=186310"
Categories:
This page was last edited on 29 September 2021, at 13:27.
About ETHW
Policies and disclaimers