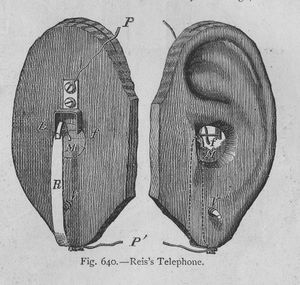 Johann Phillip Reis was boron in Gelnhausen, Germany, in 1834. He built a partially functional telephone before Bell, but his work got little exposure or recognition due to its shortcomings.

His parents died early but his intelligence was noticed and he was sent to Garnier's Institute in Friedrichsdorf, then to Hassel's Institute in Frankfort-am-Main at 14. Afterwards his uncle apprenticed him into the paints trade, but he continued to study alongside this. After his apprenticeship ended he moved to Frankfurt to Dr. Poppe's Institute, and began privately teaching other students Geography.

Reis tried to build a device to transmit sound by electricity, and encouragingly was able to transmit some words. He submitted articles to a journal in 1859 and again in 1862, both were rejected. Notably, he called his device a "Telephon" which was the first time the name was used to describe such a a device. His work was based on the theories of Charles Bourseul, who in 1854 suggested a make or break current under a diaphragm to transmit sound.

His device, which used an approximate carving of a human ear, was able to transmit simple music, but typical speech was too complex to clearly transmit. He worked on improvements to the device but was never able to build something reliable and clear enough. Eventually Bell invented a working telephone, and only then was Reis' work partially recognized for the importance of proving the concept earlier. Reis died in 1874 without much recognition for his work.