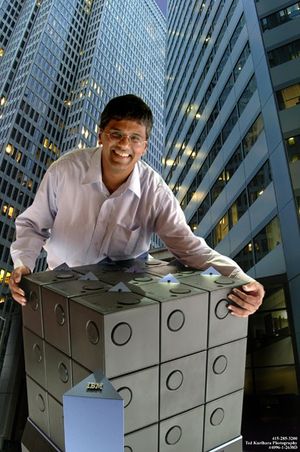 Currently vice president and chief technologist of storage systems architecture in the IBM Systems and Technology Group in San Jose, California, Dr. Menon has influenced the design of every IBM disk array product since the 1980s. His work propelled the transition from single large disks to RAID-based designs that allow for immediate data availability or the recovery of lost data, as well as for selected levels of data redundancy. He also created techniques for RAID arrays, including techniques to combine caching with RAID to significantly improve performance and the ability to add devices to an array while in use, thus hastening RAID’s adoption as the standard storage technology. In addition, he led the development of emulation of older mainframe devices and their protocols using cached RAID designs, improving storage reliability and lowering costs for the existing installed base.

His leadership fostered the strong growth of RAID array storage products, which now support all forms of server-based computing and generate nearly $20 billion in annual revenues. Dr. Menon is responsible for major advances in storage networking and attaching logical storage devices to servers through networks, including technologies which reduce the need to exchange data between servers. This saved as much as 30 percent of server capacity. In addition, he instigated the IBM development of LAN-free and server-free backups that have dramatically improved data backup and restore times.

Dr. Menon has authored 31 papers and 47 technical reports on RAID and storage systems, holds 50 U.S. patents for storage technology and has 11 additional applications with the U.S. Patent Office. He is a contributing author to three books on database and storage systems. An IEEE Fellow, he is the recipient of the W. Wallace McDowell Award of the IEEE Computer Society.

He holds a bachelor’s degree in electronics and communications engineering from the Indian Institute of Technology in Madras and master’s and doctoral degrees from Ohio State University in Columbus, both in computers and information science.

Retrieved from "https://ethw.org/w/index.php?title=Jaishankar_Menon&oldid=146170"
Categories:
This page was last edited on 29 January 2016, at 16:21.
About ETHW
Policies and disclaimers