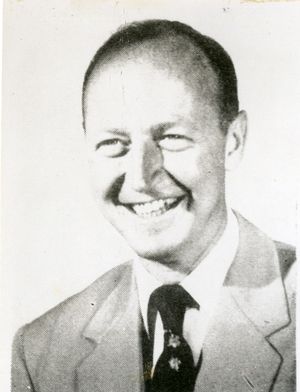 He joined the Operational Research Staff in the Office of the Chief Signal Officer, Department of the Army, in 1942. While with this group he made numerous operational radio systems studies including measurements of atmospheric noise levels and the attenuation of radio signals by jungles in Panama and the southwest Pacific, measurements and analyses of experimental low frequency loran in the Western Hemisphere, and frequency requirements for low-power radio communications and navigation equipment.

In 1946 he joined the Central Radio Propagation Laboratory of the National Bureau of Standards conducting research on cosmic radio noise and vhf and uhf propagation. He served as technical advisor to the International High Frequency Broadcast Conference held in Mexico City in 1948 and was responsible for the preparation of radio propagation information used by the conference. He served in a similar capacity in in 1950 when the Conference convened in Florence and Rapallo, Italy. Since 1949 he has been in charge of the tropospheric propagation research work being conducted at the National Bureau of Standards now centered at Boulder, Colo.