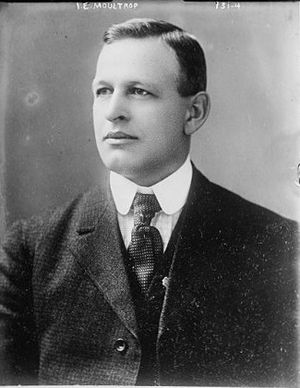 Irving Edwin Moultrop was born on July 24th, 1865 at Melrose, MA. He was an apprentice at the Whitter Machine Company's shop at Roxbury, MA from 1883 to 1886, and was appointed chief draftsman of the Boston Edison Company on January 1st, 1892. In 1897 he was made a mechanical engineer and appointed to assistant superintendent in 1913. He stayed until 1928 when he resigned to accept a position as engineer on mechanical construction work with the Boston Edison Company, and was promoted to Chief Engineer of the Company. The Edgar Station of The Edison Electric Illuminating Company of Boston, was built by Stone & Webster, Inc., under the direct supervision of Mr. Moultrop. Moultrap served on the ASME Boiler Code committee from 1912 to 1943, and was instrumental in the construction of the Edgar Steam-Electric Station in Weymouth, MA. He was chair of the AIEE Boston Section in 1919, a director of the AIEE from 1929-30, a vice president of the ASME, and was the 1930 recipient of the Elliott Cresson Medal of the Franklin Institute.